Vital role of government employees in the aftermath of Nepal earthquake

From Kathmandu, he moved on to Sindhupalchowk, close to the epicentre, and on to further small villages where PSI affiliates are on the front-line in the disaster response. Here’s Kannan’s account of his visit.

As the aircraft approached Kathmandu, the pilot made an announcement: “We may expect considerable delay on arrival; there is no parking bay available at Kathmandu Tribuvan Airport because of the number of relief aircraft landing.”  In normal circumstances, such an announcement would annoy me, but this time I felt happy that the delay was due to the international community’s support for the people of Nepal.  As I write this, more than 6000 human lives have been lost due to the earthquake that shattered Nepal on 25th April 2015.

On that day, PSI affiliates in Nepal immediately began rescue activities. The Nepal Civil Services Employees Union (NCSEU) called on all its members to assist with the rescue efforts while the Health Services Professionals Organisation of Nepal (HEPON) dealt with the urgent health needs of the people. 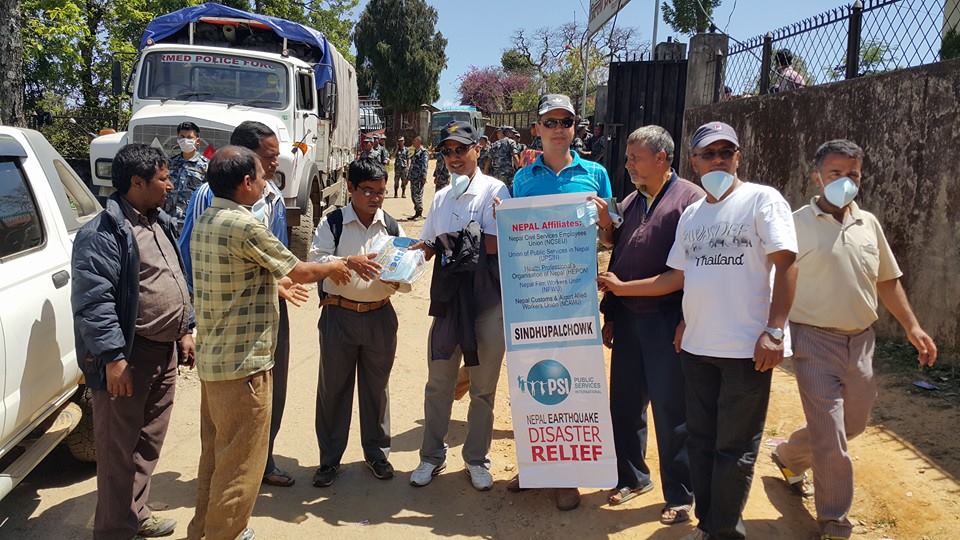 NCSEU and HEPON, with the assistance of the district committees, were in charge of coordinating the rescue and relief measures.

I offered them the water purification tablets and facemasks donated by PSI affiliates in India, and which were a welcome addition to the relief efforts.

I accompanied the NCSEU General Secretary and the NFWU President to Sindhupalchowk, a four-hour drive from Kathmandu. It was the worst affected district and relief materials were only just arriving.  In the centre of Sindhupalchowk, we could see the landslide caused by the earthquake. 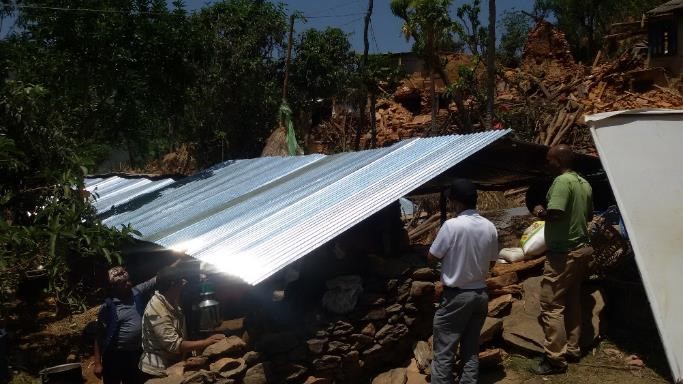 After a further hour’s drive, we reached Pokhairiya and I was shocked by the extent of the devastation the earthquake had caused. Seven wooden houses had been totally destroyed and the villagers had to stay in this makeshift tin shelter.

The devastation was apparent everywhere.

The District Health Hospital was badly damaged and a temporary Health hospital has been set up in a tent and is fully functioning since 2nd May. 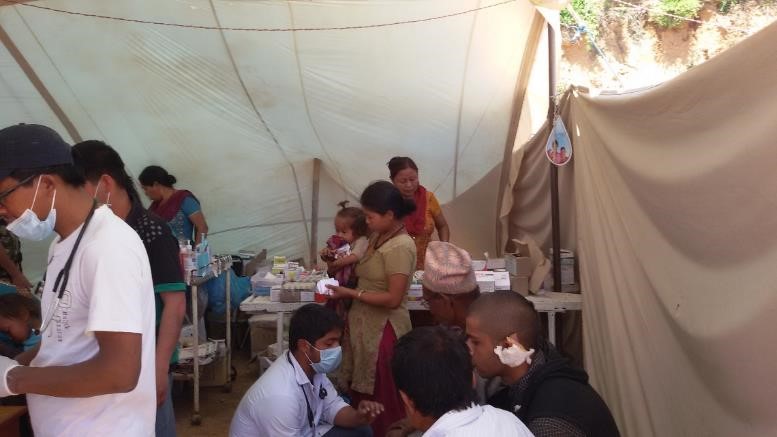 I was impressed to see the excellent work that Nepal health employees are carrying out in such difficult conditions. We saw nursing sisters, paramedics, doctors, and other health professionals doing commendable work. Army personnel who were transporting the affected persons for their health needs informed me that 164 people had received medical assistance that day. The public health workers are showing governments, international financial institutions and multinational enterprises the success of public sector health care, which is even more important in emergencies and disasters.

We met the Assistant District Administration officer who is overseeing the relief and rescue measures.  He expressed his appreciation to all the government officials and the union for coordinating the disaster management work through the army, police and revenue authorities.  The district office building was damaged but officials often spend whole days and nights in the office and are permanently on call.

On our return to Kathmandu, although it was heart-breaking to see the ruins that had once been homes, I am now more aware of the crucial role played by the public workers: government employees, health workers or electricity workers, in response to the disaster.

In the second part of his diary from Nepal, Raman Kannan, PSI Subregional Secretary for South Asia, tells us how PSI affiliates in Kathmandu are coping in the aftermath of the massive earthquake that hit Nepal on 25 April. 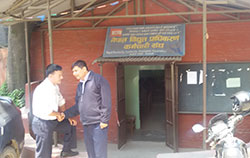 At the Nepal Electricity Authority Employees Union (NAEEU) office in Durbarmarg, I met the union President Mr. Janardhan, who was busy attending to calls from district leaders and union members.  One call was from the president of Nuwakot branch, who gave Mr. Janardhan details of the electricity worker who had died after the staff quarters for Nuwakot district collapsed, and explained the arrangements that had been made to put up tents. Another call was about the state of the roads to the New Upper Thamakoshi power plant, and that the necessary repair work might take one or two more months.  Bro. Janardhan told me that the union district committee was collecting data on number of deaths, injuries, destroyed and damaged houses, etc. 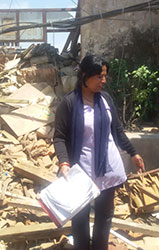 Close to the union office, we came across the ruins of the Ratna Park distribution Centre. Ms. Tara Prajapaita an Assistant of Nepal Electricity Authority, was busy taking stock of the transformer parts among the ruins.

Mr. Mukesh Raj Kafle, Managing Director of Nepal Electricity Authority told me what happened on 25 April when the earthquake struck. He rushed to his workplace office and, with his team, restored power to the hospitals, telecom, security, airport and VIP zone. Within eight hours, they had restored power to important public areas. In Kathmandu valley, 200 skilled technicians were involved in the operation to restore power and they are still working in remote districts.  Mr. Mukesh Raj Kafle told me, “Workers were motivated because they felt it was their national duty to take on this responsibility.” 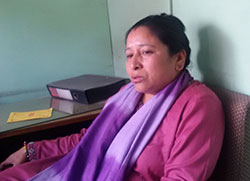 Ms. Promila Dinganja, Senior Vice President of  NEAEU, told me of her experience in the rescue and relief operations. Along with other union members, she organised for two truckloads of relief materials to be sent to Sindhupalchowk.

Dr. Babu Ram Marasini, Director at the Ministry of Health and Population Epidemic and Disease Control Division, along with the members of PSI affilate Health Professionals Organisation of Nepal (HEPON), explained that training on disaster response was an ongoing process. In 60 districts out of 75, there was a contingency plan that includes training a rapid response team on safe water, environmental sanitation and communication, with psychological counselling at every level. Major hospitals have preparedness plans that include the allocation of food and essential supplies.

He acknowledged the key role played by the health workers at the time of disaster and said that the lessons learnt will be crucial for disaster management in future.

Vinod Doshi, Secretary of DPHO HEPON branch explained that many members of the union are voluntary workers and not full-time health workers as classified by the Department.

On 26th April, members of the HEPON branch met at the DPHO office to discuss how to minimise the effects of the disaster and how to prevent any outbreak of disease. A public health professional provided advice and orientation on how to assess health risks due to water, sanitation, hygiene and the environment. They distributed prophylactic treatments for airborne infection (masks, disinfectant spray, bleach powder) and informed the public using vehicle mounted messages and leaflet distribution.  The union prepared a checklist for assessment of health facilities at all levels to assess possible disease outbreak.  There are 66 District facility and 27 Municipal facility centres under the District Public Health Office and the role of voluntary workers was crucial in case of outbreak of disease.

It was heartening to note that there has not been major outbreak of disease in Kathmandu, Lalitpur and Bhaktapur districts.  The community and voluntary municipal and health workers, who are not considered as workers with rights and minimum wages, have played a huge role and should be congratulated.

I witnessed the beginning of rebuilding and repair work in Kathmandu.

PSI's Nepal National Coordinating Committee met to take stock of the situation and future actions needed in Nepal.  The leaders thanked the PSI leadership, affiliates and international community for the support shown.

The AP Fund was used to buy disinfectants and bleach powder.  Affiliates have been despatched to all district to collect information on local needs. Considering the terrain and the present conditions, this work is expected to be completed within a fortnight.

There is shortage of clean water in some parts due to broken lines. The affiliates are already distributing drinking water where needed.

The Government has stated that in the long term, houses will be repaired or re-built. In the meantime, the PSI NCC is considering using the Aid Fund to construct temporary shelters for those most in need.

The affiliates also plan to improve health and safety awareness among workers and the public.

Finally, I met Mr. Ayodhya Prasad, Superintendent Engineer of  the Nepal Engineers’ Association (NEA), who are members of NCSEA.  Mr. Ashok Tewari, Executive member, said that most of their members are part of the relief and rescue efforts and have been deputed to the worst affected areas of the country.

There are still many tremors and people are terrified to stay at home after witnessing buildings collapse.  The NEA has formed teams of engineers, structural engineers, construction engineers and bridge engineers and provides free counselling on house safety.

Most of the rescue teams have now left Kathmandu.  In a month’s time, monsoon rains will fall on Nepal and temporary shelters will be inadequate.  There are lessons to be learnt; the need to strengthen national systems, to increase public investment, and ensure adequate human resources in health relief work and essential services.