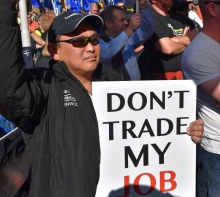 The Communications, Electrical, Electronic, Energy, Information, Postal, Plumbing and Allied Services Union of Australia (CEPU), in unity with many other Australian unions and associations, rallied in Sydney on 31 July 2015 opposing the Federal Government for signing the China - Australia Free Trade Agreement (ChAFTA).

The union movement has been orchestrating a number of rallies around Australia over the past month, coinciding with Parliament committee hearings.

The main concern is that while ChAFTA provides Australian businesses access to the Chinese market, it also allows more Chinese workers, such as tradespeople, to work in Australia for up to four years on temporary skilled migration visas, either for local companies or for Chinese companies investing in Australia.  There are no requirements for these Chinese companies to test the local labour market – to demonstrate if there are local skill shortages. The agreement allows Chinese companies involved in infrastructure projects in Australia and investing more than A$150 million to bring their own workers without testing if local workers are available.

Another major issue is that the ChAFTA intends to relax mandatory skills assessments for Chinese workers applying for an Australian temporary work (skilled) visa. The ten occupations that this will affect include (this is proposed to expand):

Unions are demanding that there be no job losses for Australian workers and that any foreign workers on these temporary visas be employed under Australian conditions of employment. Additionally, the unions do not want skills assessments “relaxed” on what is currently mandatory as this will affect work and occupational safety to other Australian workers, communities and will reduce skill trade standards.

Another major concern is the use of the Investor-state dispute settlement (ISDS) clause in not only the ChAFTA but also in the Trans-Pacific Partnership (TPP). This instrument gives investors the right to sue foreign governments if laws or regulations are encroaching on the investors’ profitability. Many workers at the rally voiced their concerns about how this will violate Australian sovereignty.

The rallies will continue around Australia for the next month.