In Turkey, Erdoğan lays off over 40 SES members

PSI's affiliate SES (the trade union of Public Employees in Health and Social Services) organized a press meeting to protest the unlawful temporary layoffs of public employees, declaration of state of emergency and the decrees suspending democracy and the parliamentary system. They have sent PSI the following report of the situation.

The unlawful actions by AKP [Erdoğan's Justice and Development Party] directly indicate that AKP aims to turn the political crisis into an opportunity to liquidate the public area according to its targets.

The state of emergency allows the Prime Minister and his cabinet the power to rule by decree and bypass Parliament. Emergency measures are also being used to impose arbitrary restrictions on freedom of expression and freedom of peaceful assembly, and to deny the right of public employees to appeal their suspensions and dismissals. Since 15th July more than 50.000 public employees have been temporarily laid off.

Since its foundation, and often a victim of militaristic ideologies, SES has always stood against coups and state of emergency when they prevail and directly criticizes those anti-democratic actions.

All the culprits should be judged fairly and emergency measures must respect Turkey’s obligations under international law, and should not discard hard won freedoms and human rights safeguards. The antidote of all coups is the extension of freedoms and ensuring real democratic frameworks in all areas.

The main responsibility for that kind of corruption in public services area lies with AKP and partisans/ pro-governmental unions who design the personnel policies in public services according to their priorities, which are directly be in conflict with the public interest. Partisans were assigned to very critical roles without necessary qualifications for many years, and SES has always tried to carry those developments to the court.

On 22nd July, in Diyarbakır, 83 members of SES working in the public institutions (Ministry of Family and Social Policies), were temporarily laid off. We requested information about the layoffs from the related ministries several times, and at last, they gave us information about the developments in Diyarbakır. We demanded an appointment to negotiate the situation and now the layoffs in Diyarbakır have been legally stopped and cancelled via official letter of Diyarbakır Directorate of Ministry of Family and Social Policies (numbered as 8255 and dated 01.08.2016) and our members now have the right to return to their jobs.

According to the latest update, 46 SES members were laid off and we continue to object legally and know that AKP government aims to intensify the attacks against SES. 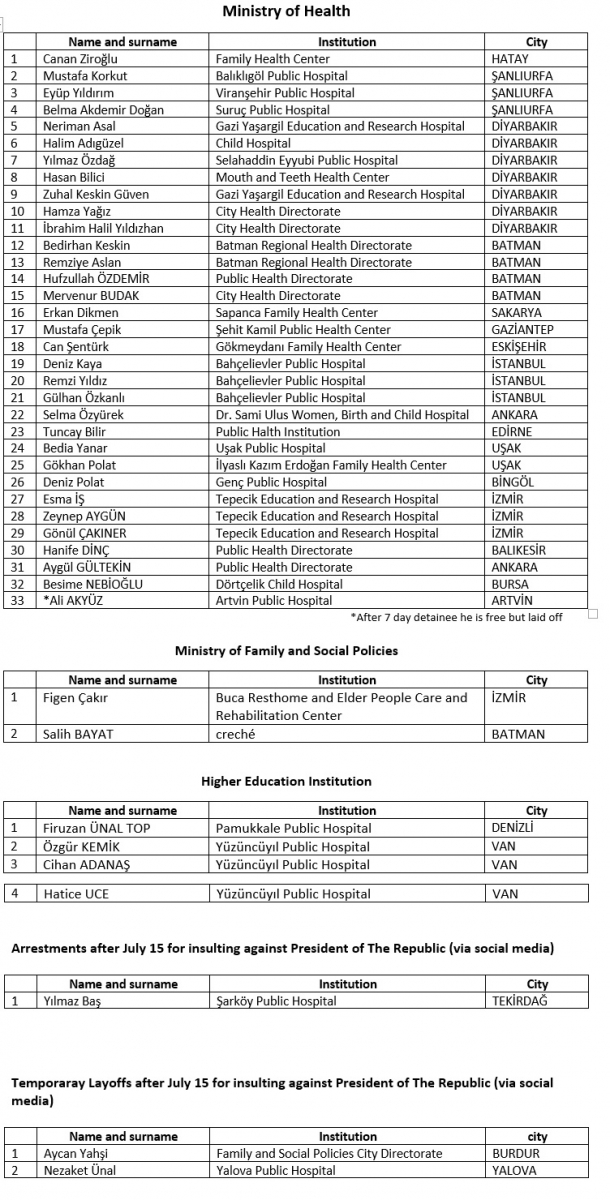 *On 3rd August, a day after this report was published, another SES worker, Hüseyin Aksoy (Nevşehir Branch Chairman), was taken into custody “for insulting” Erdoğan, and he is still detained. As well as other layoffs were announced:

ILO and letter to Ban Ki-moon

On 1st August, Rosa Pavanelli, PSI General Secretary, and Fred Van Leeuwen, Education International General Secretary, met the Director General of the ILO, Guy Ryder, and expressed their deep concerns about the ongoing and large scale violations of core labour standards in Turkey, where thousands of public employees, teachers and academics have been dismissed in the past few weeks (click here to read PSI/EI letter to UN Secretary-General Ban Ki-moon)