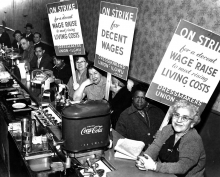 With “trade unions in transformation«, the Friedrich-Ebert-Stiftung (FES) contributes to shifting the narrative about trade unions. Moving away from the standard depiction of unions as victims of globalization, this project highlights that unions do have agency and power. The stories of successful trade union action told in this brochure demonstrate how labour can and already does shape globalization.

At the same time, FES acknowledge that the labour movement is under attack. The conditions under which trade unions operate are worsening practically everywhere: repressive political regimes and conservative backlashes are on the rise, technological change threatens to displace (unionized) jobs, while informal and precarious labour is becoming increasingly “normal”.

However, trade unions are neither helpless nor passive! all trade unions do have power. Power comes in different forms and shapes. The concept of "power resources" distinguishes four types of power unions can draw from. The resolute collective action that mobilizes the associational power of workers is at the heart of labour agency. Labour power may also reside in its place in the production process, that is, unions may make use of their structural power to disrupt or withdraw labour. Thirdly, unions have power within institutional arrangements, including through labour laws and within tripartite bodies. Finally, unions can mobilize societal power by building alliances with social and political actors or by influencing public debate, for example when they successfully link their struggles to broader social norms and values.

Importantly, trade unions have a strategic choice to apply, develop or neglect their power resources. It is their decision to use or not use them, to innovate or to stand still. the rapid changes of the capitalist mode of production in the 21st century and the pressure it puts on working people forces trade unions to adapt or to lose relevance.

Against this background, “Trade Unions in Transformation” tells 25 stories of how unions have innovated and how they were successful in their struggles (or have embarked in a promising strategic direction). The stories presented here cut across sectors, continents, levels of engagement and types of organizations and thus display the richness and variety of trade union action. authored by journalists, the stories capture the essence of case studies originally written by labour scholars or unionists themselves. These original, full stories are available for further reading at

Collecting and examining all these stories of transformation allowed to identify four main topics, along which this brochure is organized: crossing the divide between the formal and informal; facing Global capital; Building alliances; and transforming unions towards New horizons