Towards a global campaign on PPPs: PSI/Eurodad workshop 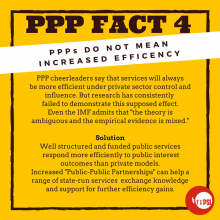 The time is now for NGOs and trade unions to exchange ideas on potential advocacy and campaign activities for the year ahead and, if possible, agree on joint actions to further strengthen collaboration and work towards a global campaign on Public-Private Partnerships (PPPs).

PSI and Eurodad are organizing a workshop on PPPs on 20 June from 10:00 to 13:00 immediately prior to Eurodad's international conference in The Hague, Netherlands. In the last year NGOs and trade unions have established a fruitful collaboration on PPPs, which resulted - among other things - in a joint boycott letter sent to the World Bank Group in February.

The time is now for NGOs and trade unions to exchange ideas on potential advocacy and campaign activities for the year ahead and, if possible, agree on joint actions to further strengthen this collaboration and work towards a global campaign on PPPs. The takeaways from this workshop will also feed into two related events taking place within the programme of the conference: a workshop on market finance vs. public finance of infrastructure and a strategy meeting on publicly-backed private finance.

PPPs are increasingly being promoted as a way of funding development projects. The last decade has seen a dramatic increase in the amount of money invested in PPPs in the developing world. Between 2004 and 2012 investments through PPPs increased by a factor of six: from US$ 25 billion to US$ 164 billion. Although investments in PPPs fell in 2013, it has continued to be on the rise since 2014. The global push for PPPs is taking place at different levels: international (the G20, the World Bank Group), regional (EU) and national, and it has an impact in the provision of infrastructure and social services, including electricity, water, healthcare, and education. A key driver of the rise of PPP-funded projects is the use of ‘off budget’ accounting, which allow governments to hide the true costs of PPP projects. There is also an empirically unfounded ideological push in favour of private sector management and delivery of services, and a strong push from the corporate sector to secure a revenue stream.

NGOs and trade unions have repeatedly questioned the biased promotion of the PPP model, providing increasing evidence that indicates that PPPs can seriously jeopardise universal access to basic goods and often worsen the fiscal problems against which they are offered as solutions. This has already led to some fruitful joint advocacy actions. For example, in March 2016, co-ordinated advocacy efforts were agreed to challenge the work of the UNECE on developing international guidelines on PPPs, and in February 2017, a group of more than 110 NGOs and trade unions from all over the world sent a letter to the World Bank PPP team and Executive Directors announcing that they will no longer participate in public consultations on PPPs until the WBG takes seriously the fiscal problems associated with PPPs.

This collaboration should continue if we want to make substantive progress in our campaign. Given the upcoming launch of Public Service International (PSI)’s campaign on the fight against privatisation, and the ongoing work of many NGOs in this field, the time is now for NGOs and trade unions to sit together and discuss how we can strengthen our collaboration.

The objective is to exchange ideas on potential advocacy and campaign activities for the year ahead and, if possible, agree on joint actions. The takeaways from this workshop will feed into two related events taking place within the programme of the conference: a workshop on market finance vs. public finance of infrastructure and a strategy meeting on publicly-backed private finance.

Expected participants: Eurodad members and partners from North and South working on PPPs and PPP-related issues, such as water privatisation and infrastructure finance, including the Bretton Woods Project, Counter Balance, The Corner House, Society for International Development, SOMO, and Oxfam; PSI and affiliates, ITUC, TUAC, and Transnational Institute.

Background papers will be circulated beforehand by Eurodad and PSI to inform the discussions. This will include information about PSI’s campaign and an upcoming Eurodad briefing on PPPs & fiscal risks.