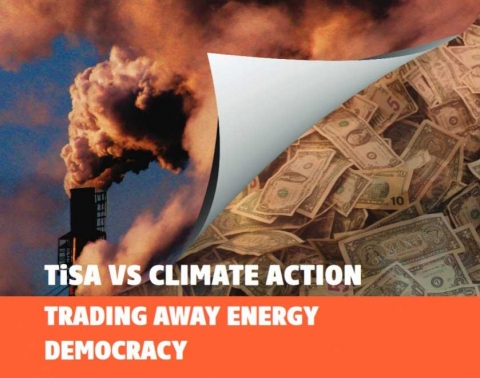 Greenpeace, trade unions and the global trade network Our World Is Not For Sale (OWINFS) claim TiSA is the latest secretly negotiated trade deal that undermines climate change action.

A report released today by Public Services International (PSI), a global trade union federation representing 20 million workers worldwide, shows the TiSA ministerial meeting on 1st of June, at the OECD in Paris, will discuss proposals rejected a decade ago that will undermine progress made at the December COP21 summit and the Bonn climate talks this month.

“Governments preparing to implement the Paris Agreement may find their trade ministers undermining their efforts in the TiSA negotiations”, states TiSA Vs Climate Action: Trading Away Energy Democracy – a detailed analysis of the recently leaked TiSA Annex on Energy Related Services.

“TiSA recycles ideas proposed by Enron and Halliburton back in 2005 – and rejected then by U.S. negotiators. The proposal that energy regulations must be technology-neutral is an attempt to insulate fossil fuel industries from changes in climate policy,” warns international trade expert Professor Robert Stumberg from the Georgetown University Law School, in Washington.

“It contradicts existing regulatory and financial incentives for renewable energy in the United States, Canada, Europe, and elsewhere. In so doing, it would stall progress toward energy jobs of the future”, he says.

TiSA Vs Climate Action highlights how the agreement is likely to expand fossil fuel exploitation, exacerbating climate change. By requiring the countries participating in the TISA talks to treat all energy suppliers equally, regardless of the source of the energy provided, the agreement risks undermining efforts to promote clean technologies and the switch from polluting energy sources such as coal and oil.

The release of the report coincides with protests against TiSA in Geneva and Paris (see below) and follows the recently leaked TTIP text from Greenpeace Netherlands which raised widespread concerns about how trade deals are undermining climate action.

Susan Cohen Jehoram, International TTIP campaigner at Greenpeace says “this leak shows that TiSA, like other trade agreements, includes measures that tie the hands of the very policy makers who are trying to implement the Paris climate agreement”.

“Instead of undermining climate policies, trade agreements have to be designed to enhance climate action. It’s unacceptable for trade deals like TiSA, TTIP or CETA to be negotiated in secrecy, at the expense of ordinary citizen and the environment. Rather than throwing away environmental protection for the benefit of big business, all new trade deals must put both climate change and transparency front and centre”, she adds.

Rosa Pavanelli, PSI General Secretary, says it is becoming clear why our governments try to hide these negotiations by conducting them in secret: “The means to achieve the modest targets agreed in Paris last year are being negotiated away in the interests of the largest corporations on earth”.

“This means that governments would have little authority to define their standards once TISA is agreed. Once again, this raises serious concerns not only for the climate and future of the planet, but also for our current democracies, subjugated to the interest of corporations”, she adds.

Deborah James, from the global trade network Our World Is Not For Sale reinforces that “with more than 80% of the world’s primary energy coming from fossil fuels that emit greenhouse gases, anything that limits our ability to shift to a clean energy future is bad for the planet”.

The PSI study is authored by Victor Menotti, executive director of the International Forum on Globalization, who has researched and written extensively about the impact of world trade on ecosystems.

PSI is also launching an animated film telling the story of how TISA will affect energy sovereignty and climate action for citizens worldwide.

Previously, PSI has released research reports researches showing how TISA will stop failed privatisations being brought back into public hands, and how it will limit governments’ ability to regulate.

Protests in Geneva and Paris

Angry protestors claim TISA undermines democracy. Concerned citizens, unions and civil society will gather today (the 30th) at 12PM at the European Union mission in Geneva – Rue du Grand-Pré, 64 –, to protest while inside the ambassadors of TiSA countries meet to discuss the ongoing negotiations.

The 18th round of TiSA negotiations started in Geneva on the 26th of May and it will finish on the 3rd of June. This round coincides with the TiSA ministerial meeting scheduled to start at the OECD in Paris on the 1st of June.

This meeting in Paris is also expected to provoke protest action from Nuit Debout: a community of French Students, workers and academics who have already denounced TiSA and similar undemocratic trade deals.

The global protest movement, which has so far had to rely solely on WikiLeaks to determine TiSA’s dangers, is demanding that leaders release the full text of the agreement so that people can democratically decide on whether to pursue the deal.

The Trade in Services Agreement, or TiSA, is a trade agreement covering nearly all service sectors around the globe, which has secretly been negotiated by 50 countries including the USA, Canada, Australia, Japan, Colombia, Costa Rica, Peru, and the 28 countries of the EU. Uruguay and Paraguay recently withdrew from the talks amid large public outcry.

The 50 countries involved in the negotiation of this little-known trade deal cover 70% of the world’s services sector.