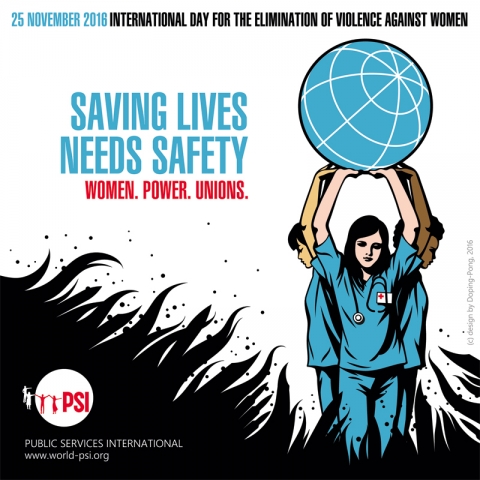 25 November - International Day for the Elimination of Violence Against Women. Trade unions are struggling to end violence at the workplace and in society. We stand for peaceful solutions, a culture of dialogue based on the human right to health, peace and social protection. In all countries, we need a strong commitment from governments to address the deeply rooted causes of violence against women: inequality and discrimination.

Public service workers are at the forefront of conflict and emergency situations around the world. They assist women who suffer from domestic violence, help victims of violence in the street, save the lives of those hit by natural or man-made disasters, and are sometimes themselves targets for violence by third parties. Violence is often perpetrated by fighters from various armed groups. Rape and physical violence continue to be used as a weapon of war to punish civilians, perpetuating thousands’ years old barbaric crimes. Rape is committed along with murder, physical aggression, abductions and looting. Increasingly, hospitals and health workers themselves are also targeted by armed forces to intimidate both their opponents and local populations, in total violation of all international conventions.

Rosa Pavanelli, PSI General Secretary says: “Trade unions are struggling to end violence at the workplace and in society. We stand for peaceful solutions, a culture of dialogue based on the human right to health, peace and social protection. In all countries, we need a strong commitment from governments to address the deeply rooted causes of violence against women: inequality and discrimination. States must provide adequate measures to prevent violence and protect threatened women, as well as prosecution, counselling and education to change the mentality of people. Shelters for abused women must be provided, and it is unacceptable that under austerity policies those services are abolished in many countries. Governments also need to provide safe harbours for refugees, of whom women and girls are the majority, and ensure that the needs of women and girls are taken into account. Public Services International (PSI) recognises the strong links between health, social protection and the achievement of gender equality. Ending extreme poverty, living in peace and democracy, and achieving all the global sustainable development goals means that societies must provide opportunities for all people, especially women, to prosper through quality nutrition, health and education.”

Evidence from studies and experiences of healthcare workers in PSI’s global family point to the fact that, while both men and women in the sector suffer from various forms of violence, the power relations in society that see women as second-class citizens translate to the reality that women healthcare workers are especially targeted. Emergency workers, health professionals, particularly paramedics and nurses are the two occupational groups that face violence at the workplace most often.

Tackling violence requires a pro-active response aimed to eliminate its root causes. Long-term projects, including constant evaluation of the various steps taken and based on participation and collective bargaining are fundamental.  Establishing international enforceable standards, and monitoring systems are key in updating existing legislation on workplace violence, harassment and other forms of gender-based violence. These standards are invaluable in countries where there is no legislation.   An important tripartite agreement was reached in the ILO in October that will allow to put forward an international standard to tackle violence against women and men in the world of work in which gender-based violence is a fundamental issue.

Through innovative campaigns, starting at the workplace, to national and regional actions, PSI affiliates are using their collective strength and power to raise awareness, break the silence, campaign for national laws and promote the adoption of a global ILO standard to eliminate gender-based violence at work and in communities. At the same time, we call for the recognition of the central role of gender responsive quality public services and universally accessible health services to sustain long-lasting peace and recovery from conflict. The protection and respect of health workers in conflict zones and in emergency situations is key to ensure the safety, human rights and lives of all. 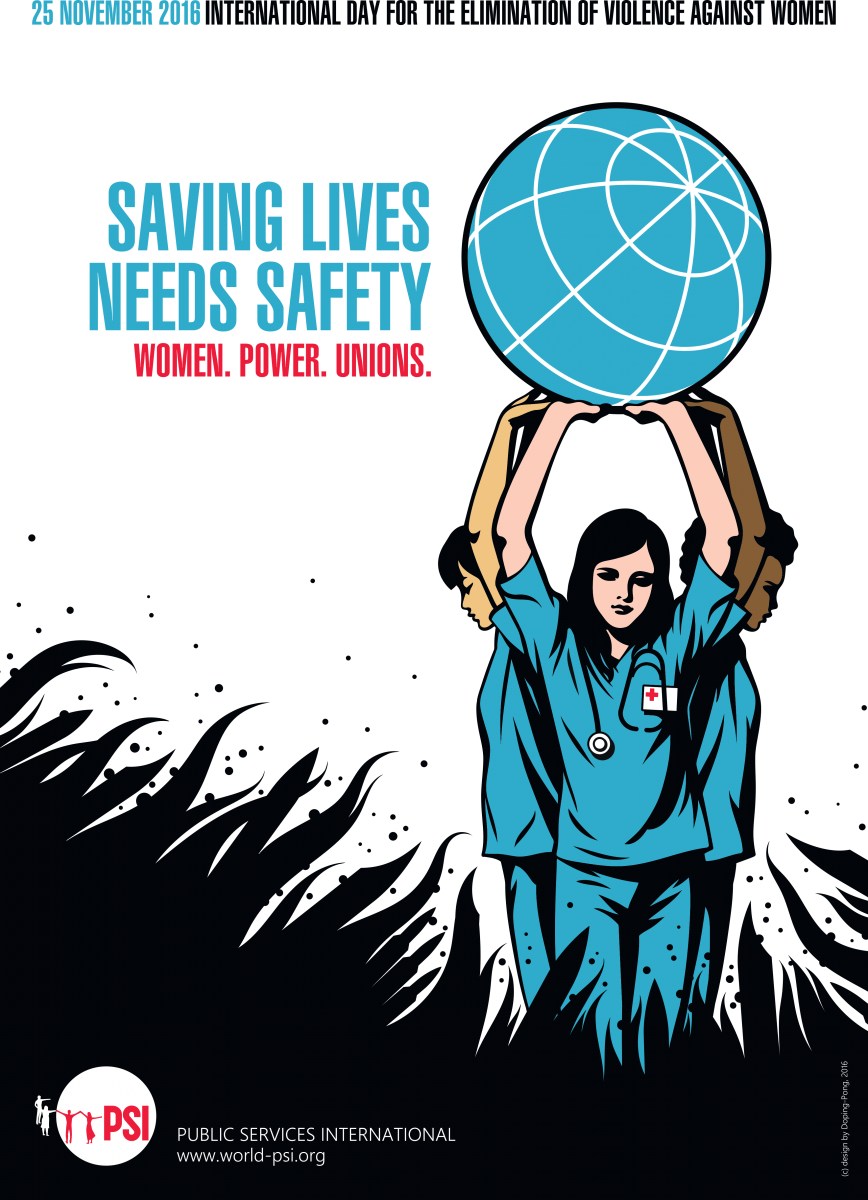 Case studies on violence at work: