The Route of Shame: A bicycle ride for social justice 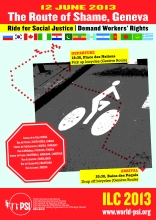 Public Services International (PSI) invites you to join us on the “Route of Shame”, a bicycle* ride to protest in front of the Permanent Missions in Geneva of countries that violate trade union and labour rights.

We will pass by the missions of Russia, South Korea, Canada, Nigeria, Iran, Paraguay, Pakistan, Ethiopia, Guatemala, Honduras, Cameroun, Bangladesh, Dominican Republic, Mauretania and Greece. In these and many other countries, violations take place that range from refusing registration to trade unions, discrimination of trade union members, political repression, impunity of violent attacks and murders of activists, and deadly working conditions.  Precarious jobs in the public sector and austerity measures continue to undermine trade union rights around the world.

PSI, an international trade union federation, invites local unions, international organisations, NGOs and the people of Geneva to participate in this original protest action organised during the 102nd Session of the International Labour Conference 2013.

Stops are planned in front of the Missions of Russia, South Korea, Guatemala, Bangladesh and Greece.

PSI at the ILC