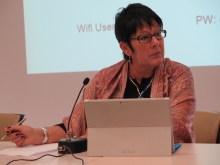 On 13 June, Rosa Pavanelli speaks at the Women's Rights and Tax Justice Convening in Bogota, Colombia during the dialogue session between PSI's General Secretary, Jose Antonio Ocampo, member of ICRICT and Chairman of the Board of Banco del República (Central Bank of Colombia) and Maria Nieves Rico, Director of Gender Affairs from the Economic Commission for Latin America and the Caribbean (CEPAL). See the full speech here.

Rosa Pavanelli, in her opening dialogue at Tax Justice and Women´s Rights Global Convening stated that:

We must use the opportunities and be bold

If this is harnessed for reactive politics it as a very dangerous thing.

What is important to understand is that both the tax and gender movements are radical movements.

Both have at the heart of their project an attack on those people who have power and a shift of that power.

And on the other hand a redistribution of wealth away from the elites to working people.

Therefore, we are embarking on a truly radical project – and we must never forget that.

But the two movements are also intrinsically connected.

Economic power translates into political power. And the gendered system of taxes that is part of the global economic architecture channels great wealth to those who defend the current system.

This system creates enormous inequality that effects both workers and women. Both are told this is the way of the world and it can be no other way.

It is this logic that says that market forces must prevail.

That public services are inefficient – and that non market based work – work such as domestic work – has no value as it can not be traded.

It is this logic that says that competition through free markets is the best and only way to provide services to people.

It is this logic that says that we do not have enough resources to provide public services based on need to those who require them.

It is this logic that imposes that users have to pay.

An argument that only makes sense if you believe the rhetoric that we don’t have enough money. At a time when we have the most wealth on the planet ever why must we accept diminishing services – and rights.

And the problem with this rhetoric is that it has become so persuasive that people don’t even question how absurd it is.

Theresa May – the UK prime minister was asked by a nurse in the UK election why she was undermining the NHS and real wages for nurses had gone backwards in the last 5 years.

May responded by saying that she would like to help but that there is no Magic Money Tree.

In fact, the UK is one of the worst tax avoidance enablers in the world. It had built, and defends, the most comprehensive web of offshore tax havens – starting at the city of London, spreading out to the Jersey and Guernsey islands and reaching to Hong Kong, Singapore and the Caribbean.

All designed to shift cash out of the UK and into tax havens.

In fact, there is a magic money tree- and the tories have built it and defend it.

- Women are massively over represented in the lower quartiles of wealth.
- In Bangladesh for example women make up 85% of the garment industry
– most of those killed in Rana plaza where women.
- Women are on average paid between 10-30% less for the same work.

Going back to Theresa May’s answer to our nurse, what is especially important in this story for us here today – is that nursing, and care work in general, is highly feminised. We can say the same for education.

The lack of money to adequately and fairly pay these professions is a direct contributor to the gender wage gap.

It also contributes to the undervaluing of care work which undervalues the massive number of unpaid hours of work that women do in the home.

And finally, it undermines the services of the NHS – or public health, as well as the public education systems

And this has massive gender effects on so many levels.

First, as women are paid less and have less assets they are hit harder if they don’t have access to free health care.

Second they often carry the burden for children’s health.

Thirdly they have a whole range of pre and post natal health care requirements.

Also development is important for women and relies on taxation. Education and SDGs

As well a social development

Tax needed for this – and women suffer more from underdevelopment for a range of reasons.

Even indirect taxation systems are a source of discrimination. The example of tampons and hygienic pads.

The radical nature of the project means that we are threatening many interests.

We must remember that even raising these issues threatens very powerful interests.

On 15 April 2016 the Panama leaks scandal broke, highlighting once again the connections between the wealthy elites, politicians at the highest levels and global tax avoidance.

Simply exposing those who benefit from these obscenities is creating massive public anger and we must do more of it.

But exposing the problems is not enough - we must also have credible alternative visions – PSI is a proud founding member of the ICRICT – and co-chairs the steering committee. We believe that promoting an alternative vision is critical in creating progress towards a better world. Many of our country tax platforms have adopted the ICRICT declarations as their policy platform.

PSI as a leader in the global tax justice movement has acknowledged this form the outset and worked tirelessly to build alliances.

We have reached out to PSI unions all over the world and established national union tax platforms in Latin America and Africa.

Most recently we established them in South Africa and Nigeria.

We have reached out to private sector unions – as their members benefit from well-funded universal public services AND they suffer at wage negotiations if company profits have been shifted to tax havens – as it means they often get cheated out of wage rises.

And we have worked tirelessly to build alliances with civil society at national, regional and global levels.

Our South African Tax forum was launched earlier this year with Oxfam support.

Public Services Day this year on 23 June will have a focus on tax justice and national activities. We have been working with ActionAid and Global Alliance to co-ordinate globally – and with many more civil society organisations at country level.

We hope that everyone here will support these activities in their home countries on their return.

And we are proud to be working with Tax Justice Network and Global Alliance to organise this conference.