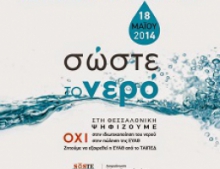 On 18 May 2014, the citizens of Thessaloniki held a self-organised referendum on the privatisation of their water company. The proposal was massively rejected, over 98% of votes were cast against the privatisation of water and sanitation in the Greek city of Thessaloniki. PSI is asking Greek citizens living in other countries to send a message to their embassies or consulates urging the Greek national government to respect the outcome of this non-binding referendum.

Send a message to your missions or consulates

Respect the will of the people

On 18 May 2014, citizens of Thessaloniki (the second largest city in Greece) voted 98% against the privatisation of their water utility – known as EYATH.  The vote is a non-binding referendum or popular consultation.  The Greek national government tried to intimidate the organisers of this consultation with threats of arrests, fines and other criminal sanctions.  The government said that it would interfere with the first round of Greek municipal elections.  The organisers went ahead, and were able to mobilise 1500 volunteers, including many from European public services unions, to ensure a smooth process.

This privatisation is being imposed by the Troika (IMF, European Commission and the European Central Bank) as one of the conditions for supporting the Greek budget.  Some estimate that a successful bidder will be able to recover their investment in just two years.

We think it would be useful if Greek citizens living in other countries could send a message to their embassies or consulates urging the Greek national government to respect the outcome of this non-binding referendum.

Contact details for Greek missions can be found here. Outside of the EU, the biggest concentration of Greeks overseas are in the USA, Canada, Australia, South Africa, Russia, Brazil, Argentina and Chile.

For further details on this totally unjust and unnecessary privatisation, please see here: