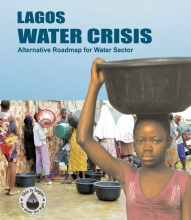 The Our Water Our Right coalition, fighting privatisation of water in Lagos (Nigeria), stepped up the pressure by releasing a report called "Lagos water crisis: Alternative roadmap for water sector". This new publication critiques the history of poor public administration, picks apart the deficiencies of decades of World Bank driven privatisation policies, and presents the way forward for the city administration to implement human rights obligations by ensuring universal access to water for all Lagosians.

As has happened in many countries under World Bank privatisation edicts, public institutions have let the utility degrade and have postponed needed improvements as they waited for the Bank and the private sector to magically solve their problems.

Thanks to the pressure of the coalition, it appears as if the privatisation policies are on hold, that the World Bank is pulling back, and that the time is ripe for bringing together all of the elements needed to build a strong public water service.

“Water workers and their trade union are an integral part of the solution to delivering universal access in Lagos.  We know the real situation behind the plant gates, in the treatment plants, under the streets, and in the communities.  We need the tools to do our jobs.  We need real participation, transparency and accountability. Our elected officials and senior management must get on board with the plans to build our public utility, and not try to sell us out to the highest bidder.”

“We are at an important crossroads in Nigeria.  The mobilisation of trade unions of water workers, in coalition with social and environmental groups is bringing about the necessary political pressure in Lagos.  The World Bank and other international donors must abandon their failed ideological privatisation nostrums and support strong public services.  Lagos can look to other public water operators to help, and can draw on powerful mobilisation among its own citizens. We need to ensure the same levels of pressure across the country, as all Nigerians need and deserve access to quality public water and sanitation services.”

Peters Adeyemi, PSI Vice-President for Africa and Arab countries, congratulates the campaign on its progress:

“The Our Water, Our Right is an inspiration to us all, and shows what can happen when workers and citizens join to pressure elected officials – who have become too accustomed to ignoring our needs while filling their pockets.”

The Lagos Water Crisis report can serve as a model for other countries fighting the privateers, including where the international financial institutions and bilateral donors are seeking to impose this failed model.