PSI World Women's Committee report to the Executive Board 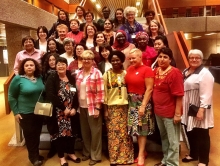 The PSI World Women´s Committee met on 18th May 2016, with the participation of 33 women (16 titulars and 17 observers) and the General Secretary. Discussion focused on how to shape PSI´s policy on gender equality for the 2017 Congress.

Here are the principal themes and decisions:

United Nations Commission on the Status of Women (UNCSW): Report from the 60th session, results and way forward

The main theme of the session was the economic empowerment of women and its connection with sustainable development. Our major achievement this year was the recognition of the role of trade unions in defending women’s rights at the workplace and in society in general.

During these two weeks, the women’s movement had a strong discussion that transcended states and governments, strengthening the social movements and shaping new alternatives. In this context, PSI organised a parallel event entitled “Arab Women and the Right to Peace”, introducing for the first time in the feminist debate the essential role of independent trade unions in building democracy and promoting peace.

Although the negotiations over the content of the Agreed Conclusions had not been conducted before the event this year, and the women’s movement was not excluded as it was at the 59th session of the UNCSW, and despite the fact that one of the main achievements in 2015 was the agreement on the participation of civil society representatives in the preparation of UNCSW60, the procedure for inviting members to the High-Level Panel on Women’s Economic Empowerment, once again downgraded the participation of civil society and grassroots organisations and turned the production of proposals for action into an elitist exercise. The most worrying aspect of the process for selecting the panel members and its final composition was the way it tilted the balance towards financial and corporate power.

The main theme of UNCSW61 will be “Women’s economic empowerment in the changing world of work” and the Brazilian ambassador, Antonio Patriota, was re-elected as chair.

In 2002, PSI approved a gender-mainstreaming policy and this has been reiterated in all Congress decisions since that date, up to and including the most recent Congress in Durban in 2012. Gender-mainstreaming requires changes to structures and relationships so they are more equal for both men and women.

During this last period, PSI has strengthened its sectoral work. It is essential to have a gender focus but for this to happen we need to improve our understanding of sectors, in terms of the gender composition of their workforce, union membership and leadership. We need practical ways of mainstreaming gender in sectoral work. This has been done on a concrete basis in the water area and by developing a new concept around gender-responsive public services.

The attack on labour and trade union rights in the public sector shows no sign of abating and is increasing in many countries. Collective bargaining has lost ground in some places and women have consequently seen significant achievements reversed.

Gender violence in the workplace

In 2015, the ILO Governing Body agreed to discuss a new convention on violence at the workplace, including gender-based violence, in time for the International Labour Conference in 2018. PSI and its affiliates have a lot of expertise in this area. In Canada, for example, unions have made progress in dealing with the impact of domestic violence at the workplace. In other countries in the Caribbean, the Southern Cone and Brazil, progress has been made in dealing with gender violence at the workplace. This experience could help us make an important contribution to the new convention. PSI will attend the ILO Meeting of Experts in October this year and will contribute material to the Report on Law and Practices that is due to be completed by the beginning of 2017, prior to national consultations with ILO constituents.

The ILO's Bureau for Workers’ Activities (ACTRAV) has invited PSI and other global union federations to join a pilot project for implementing and integrating all this work into the process of building the new convention.

PSI is part of the Domestic Violence Network (DV@Network), which is based in Canada and to which Canadian and Australian unions and the global union federations are members, together with universities.

The incidence of precarious work continues to increase at an alarming rate throughout the world. Precarious work in the public services affects all workers and users due to its impact on the quality of services. The proportion of young people and women affected is very high. The prevalence does of course vary but precarious work is already a worldwide phenomenon.

ITUC has invited PSI to work on a joint project in Africa, to raise awareness of precarious work in public services in particular countries, before later going on to organise a joint campaign. PSI will be part of an exploratory study on the nature of employment and labour relations in the health and education sectors. The project will be supported by the FNV, FOS and the ITUC’s African Labour Research Network, in Ghana, Malawi, Namibia, Senegal, Swaziland, Zambia and Zimbabwe.

PSI is organising a World Action Day on Precarious Work on 7 October 2017. It will need to include the feminisation of the problem and its impact on young women workers.

This year, the issue has become more relevant and important in the context of defining the Sustainable Development Goals (SDGs) and discussions at the UNCSW60. This provides an opportunity for PSI to develop its proposals to transform gender relations at the workplace in the public services and overcome the historic and persistent sexual division of labour. A recent ILO´s report about Women and Work reveals the persistence of a number of unacceptable gaps.

ILO Convention 100 is one of the core labour standards and is the most effective instrument for dealing with this problem in formal employment. On the other hand, PSI affiliates, particularly in the UK and Canada, have developed a high expertise in addressing the problem at the level of education, negotiation and litigation, achieving important milestones that are wins not only for these countries but for women workers of the world.

Gender focus in the PSI Programme of Action for 2018-22

Since the World Congress in Durban in 2012, PSI has experienced significant political growth and an increased presence on the international scene, where the direction of global policy is debated and decided. It has confronted, in theory and practice, the political and economic powers of states and transnational companies.

Its campaigns to promote social and economic justice and efficient and accessible public services throughout the world have put equality, and within that, gender equality, on the agenda to build a new and non-oppressive society.

In this context, PSI will need to upgrade its political action on the now strategically important issue of gender equality. The organisation should adopt a comprehensive approach to this challenge and the World Women's Committee (WOC) should play a specific role at grassroots level.

To achieve this, the PSI Congress will need once again to reaffirm its gender mainstreaming policy.