PSI women are empowered and determined to force change

The PSI Women's Committee met on 25-26 May 2015 in Geneva. A varied agenda included violence against women, precarious work, labour migration, peace and freedom, gender equality and gender strategy for the post-2015 development agenda.

Many interesting interventions from WOC members showed that PSI women are empowered and determined to force change. 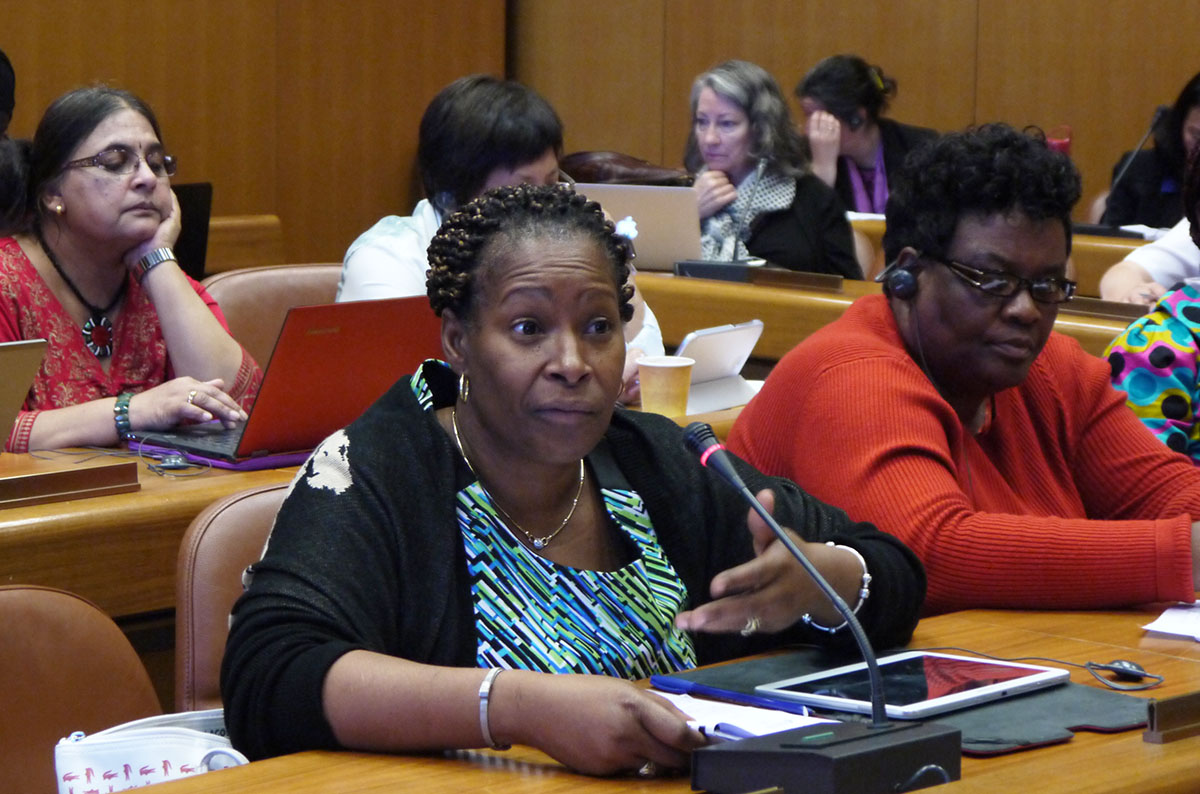 UN Women has civil society advisory groups at regional, multi-country and national levels to allow civil society representatives to take a more active role, and no longer confined to the yearly UNCSW meeting in New York. From this year onwards, the trade union movement will have a seat on all of these committees after an agreement reached with UN WOMEN in March 2015.

It is important that PSI women’s representatives join those committees, together with representatives from ITUC and EI. PSI will prepare guidelines on how to lobby governments at national level.

PSI has grown and done a lot of work for UNCSW and now we are preparing for UNCSW60.

Jillian Bartlett, Trinidad and Tobago, said, “Women work and sacrifice their time and effort to empower women, knock on doors and force them open! ” 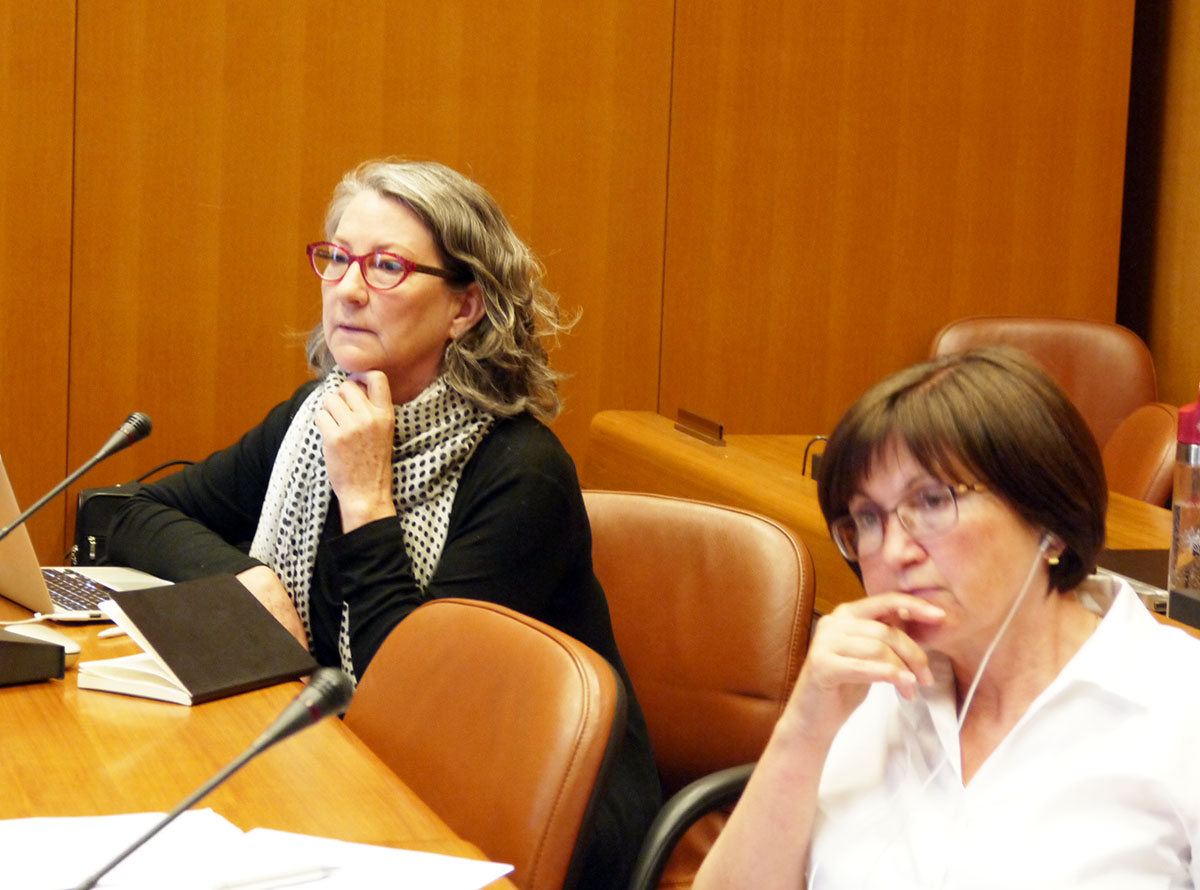 Morna Ballantyne, Canada (left), said that Canadian employers lose 78million CAN$ a year because of domestic violence and consequential work absenteeism. Women who suffer domestic violence are more likely to get pushed into precarious work and unemployment. And in many cases, domestic violence happens in or close to the workplace. More: http://canadianlabour.ca/issues-research/domestic-violence-work 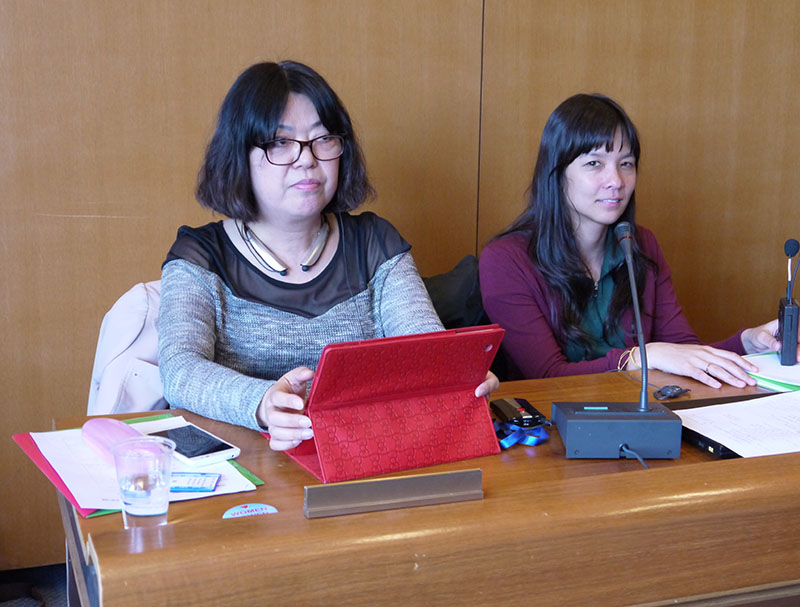 In South Korea, trade unions are fighting against a situation of precarious work for education support workers, said Boo Hee Choi, KPTU (left). The Korean President Park Guen Hye announced that precarious work would be removed but instead has expanded precarious work contracts. KPTU represents 20,000 education support workers, 90 per cent of them are women. They are fighting to expose government policy and to work against it. They are awaiting the government’s budget decision on the matter in June 2015 and if the government does not respect its promises, the union will hold a rally at the end of the month of June, together with a general strike before the end of the year.

PSI interviewed some Women's Committee members and asked them about their union’s activities. Please click on the names to watch the video interviews:

Irene Khumalo from Swaziland Democratic Nurses Union (SDNU) talks about gender issues including violence against women in Swaziland. She explains how the numerous factory closures, following the country’s removal from a U.S. free trade bloc, has greatly affected women. She describes how the Federation TUCOSWA (Trade Union Congress of Swaziland) initially recognised and registered by the Swazi government was then deregistered in 2013, leaving the Swazi workers without a voice. May Day was celebrated in fear of the government’s retaliation. Fortunately after this date the federation was once again registered by the government. Khumalo tells us about their successful campaign on salary cuts and their future campaign on gender based violence.

Morna Ballantyne from the Public Service Alliance of Canada (PSAC) tells PSI that the PSAC has lanched an important campaign in defence of the sick leave provisions enshrined in their collective bargaining agreement. Canada's federal conservative government has made serious budget cuts and is seeking to replace the sick leave provisions with a new sick leave plan based on a contract with a private insurance company. PSAC has formed a coalition with other unions to defend their workers' rights.

Fatou Diouf, Public Utilities Syndicat Autonome des Travailleurs de la Sénégalaise des Eaux (SATSE), talks about gender equality and young workers. In Senegal, as in the rest of Africa, young people are not joining unions for the following reasons: rising unemployment, late age of entry into working life and lack of intergenerational trust. Fatou Diouf talks about tax justice and the importance of raising awareness on this topic. She mentions the importance of advocacy for the ratification of certain fundamental Conventions for women such as ILO Convention 183 on the protection of motherhood.

Bohee Choi, Vice President of the KCTU Korean Public Service and Transport Workers’ Union (KPTU), talks about the precarious work situation of education support workers in Korea. These workers face discrimination in terms of wages and rights because the work they do is seen as non-essential. However, the union has insisted that their work is important and they should be respected as members of the education community. The union has already won some rights for the workers, but continues to fight for recognition of the status of education support workers as public school workers. They will take part in a massive protest on 27 July 2015 and call on the Ministry of Education to listen to their demands, especially as concerns an end to wage discrimination.

Also see the presentations that took place during the meeting.