An international delegation of Public Services International healthcare members told world leaders at the recent G20 Summit in Cannes, France that a financial transactions tax is needed to remove the global economy from the emergency room. The high profile media action on 3 November was initiated by PSI and our affiliate National Nurses United, and staged in partnership with the International Trade Union Confederation and civil society partners Oxfam and the World Wildlife Fund. PSI members from France, USA, South Korea, and Australia took part.

The NNU, which has been leading the call in the US for a “Tax on Wall Street,” held a concurrent rally of over 2000 nurses in front of the White House and Department of Treasury in Washington, DC. In Los Angeles, nurses marched through the financial district.  In San Francisco, labour unions and community groups joined NNU affiliate California Nurses Association in rallies at bank offices and in front of the Federal Reserve.

"Taxes are not a punishment.  We collect them to support public services," said Peter Waldorff, PSI General Secretary. "If you care about the imbalances between the rich and poor, you should support the financial transactions tax." 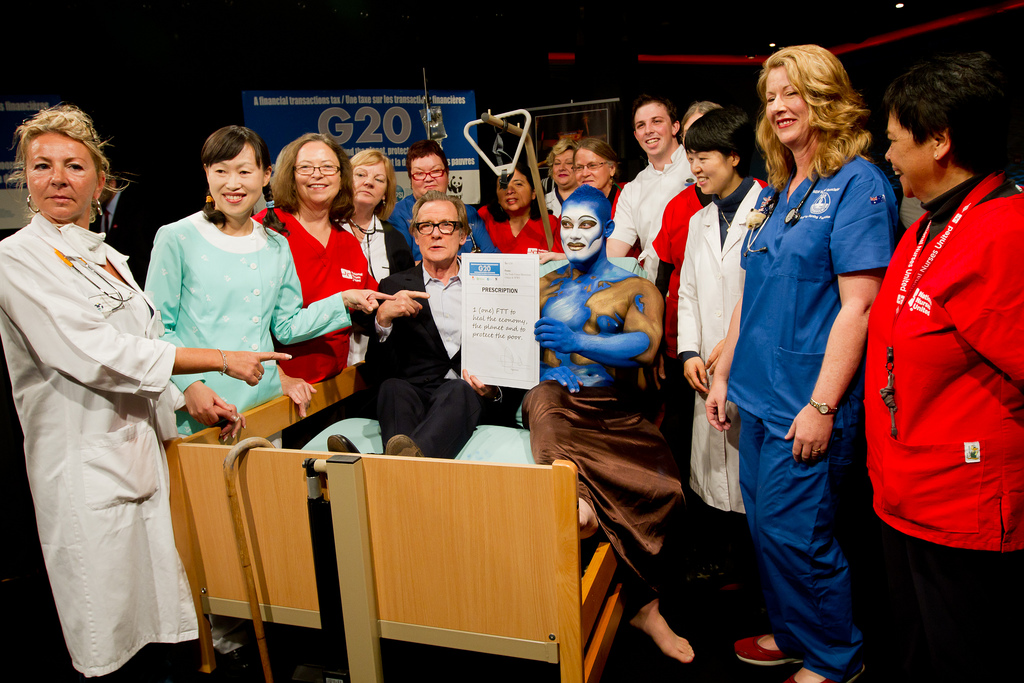 PSI affiliate members from Brazil to South Africa are backing the global union movement’s call for a financial transactions tax or "Robin Hood Tax" that could raise hundreds of billions of dollars a year to heal economies, promote sustainable development and environmental security, and fund quality public services.

However, despite billionaire advisor Bill Gates’ endorsement of the “Robin Hood Tax” concept and the Cannes Summit’s recognition of the potential of a financial transactions tax – the G20 failed to deliver effective international measures on this front.

"I'm incredibly proud of the nurses internationally for their global advocacy for their patients and society," said RoseAnn DeMoro, NNU executive director, at the press conference in Cannes.

"The nurses don't ever give up on people and we won't give up on this cause."

The NNU held FTT campaign actions, including a march of 1000 nurses on Wall Street in June, and events across America on September 1, in advance of the Occupy Wall Street movement that is now spreading world-wide. Despite incidences of arrest and police harassment in several American cities, NNU members have maintained their posts offering healthcare to Occupy Wall Street participants in locations across the US.

The OccupyWallStreet movement has made the call for an international financial transactions tax its first official demand.

The Council of Global Unions’ Quality Public Services-Action Now! campaign also highlights the need for an FTT as part of fair taxation needed to support public services for the benefit of all.