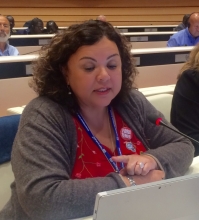 The International Labour Conference has taken off with PSI and its affiliates taking an active part, including in the Committee for Fundamental Principles and Rights at Work, where Juneia Batista, PSI WOC Chair and Sandra Vermuyten, PSI Head of Campaigns, are working with a large group of affiliates.

The follow-up to the Declaration provides for a recurrent discussion by the International Labour Conference (ILC) in order to ensure that the Organization can better understand the diverse realities and needs of member States with respect to each of the strategic objectives.

The recurrent discussion also assesses the results of the ILO’s activities on the strategic objective concerned, with a view to informing ILO strategic planning and programme and budget discussions. The first recurrent discussion on FPRW took place in 2012, following which the Governing Body adopted a plan of action for the period 2012–16.

In recent years, millions of people around the world have spoken out against austerity, in favour of better wages, and against the secret trade agreements that will put an end to democracy and rights won with so much effort. In an attempt to silence national protests against an economic model that benefits 1%, protests are being criminalized and fines are being imposed on those who dare to stand up.

In the last 20 years the share of total income wages has declined in 70% of countries, despite the increase of the global employment level. The share of secure and well-paid jobs is reduced every day and even in the public sector, which used to be stable and well protected, more than 50% of staff in precarious jobs. Most of these less protected and poorly remunerated positions are occupied by women.

Instead of creating decent jobs with decent wages, the current economic model pursues full exploitation with minimum wages, zero hours contracts and young people who work for free for months. In many countries the situation of workers is even more desperate without formal access to employment, investment in public services, and growing insecurity.

The SDGs must be based on equality and human rights rather than promoting the privatization and unbridled commercialization of all public goods. A sustainable future is built on democracy and decent work, not the interest of a few.

PSI calls for the real transformation of the world of work and gender relations, equal pay for equal work and the revaluation of women's work. We need political, social and cultural change based on policies favourable to women and workers and trade unions have a key role to play in this process. Discrimination on the basis of gender, age, sexual orientation and race must be tackled as a matter of urgency to prevent further inequalities and exclusion.

The wage gap between women and men is a persistent reality, and the result of the sexual division of labour. It affects women of all ages, classes, cultures, nationalities and sexual identity, who temporarily or permanently play roles that are undervalued by society. In many countries, employment in the public sector also reflects the horizontal and vertical segregation of women workers. The productive sectors and the jobs in the public services offer salaries higher than the services of care. In addition, women make up the majority of the precarious workforce in all sectors of the economy. We need policies specifically aimed at eliminating the wage gap, which otherwise will take decades to disappear.

We call for the implementation of fundamental rights for all - and the leadership of the ILO and the promotion of the model of social dialogue in the realization of the objectives of sustainable development. Without a total commitment to fundamental rights we will not be able to carry out the 2030 agenda.

See also: Documents and reports submitted to the Conference for this Committee