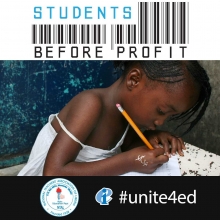 The  study, “Partnership Schools for Liberia: a critical review”, by Tyler Hook,PhD candidate in Educational Policy Studies at the University of Wisconsin-Madison, USA, was commissioned by Education International with the support of Action Aid, and launched publicly last Saturday July 29 in Liberia’s capital Monrovia.

The report raises serious concerns about the government’s school privatisation project called Partnership Schools for Liberia (PSL), which places primary and pre-primary education provision into the hands of eight non-state actors, of which US-based Bridge International Academies is the government’s preferred provider.

The conclusion of the study is that this move towards the privatisation of  the entire primary and pre-primary education system will expose Liberia’s public education system to grave risks. It especially finds a striking lack of transparency, sustainability and independent evidence in the development of the PSL project. The study also finds that PSL puts increased power in undemocratic, private institutions, that make decisions with little community input and accountability, resulting in inequalities within communities and regions.

Civil society stands up in defense of public education

The Ministry has elected to proceed to expand the programme from September 2017 despite lack of independent evidence and serious shortcomings exposed during the pilot. This includes children being denied access to their local schools as well as dropping out of school due to a failure to deliver on a promised school lunch programme as part of an extended school day.

The National Teachers’ Association of Liberia (NTAL), affiliated to Education International, alongside 11 local unions, religious groups and civil society organisations, has signed a statement in which it rejects the PSL program on the basis of the “lack of independent evidences, transparency and resultant lack of accountability”, which do “not make for good policy nor good governance”. “We fear, once having outsourced our schools through this PSL arrangement we will never be able to get them back. We will be at the mercy of large corporate operators who will seek to maximize profit at the expense of Liberia’s children and their future,” it continues.

The signatories are calling on the government to immediately abandon the PSL program and to invest in free quality public education. They acknowledge the challenges that the Liberian education system is facing and state their “preparedness (…) to work constructively with the government and other interested parties to develop a sustainable Liberian plan leading to the (…) improvement in the provision of quality education for all Liberian children”.

The statement can be downloaded here