In the prison where the massacre took place, conditions are bad for the prisoners and precarious for the staff

The company managing the prison has stated that it does not exercise police powers of enforcement inside the Manaus prison, however this task is stipulated in the contract signed with the government of the state of Amazonas and was observed during visits made by human rights advocates.

The massacre of 56 people in the Anísio Jobim Penitentiary Complex (Compaj) in Manaus, Brazil, due to a dispute between two criminal gangs, the Family of the North (FDN) and First Capital Command (PCC), could have been avoided if warnings about this risk had been taken into account. One such warning came from experts from the National Mechanism for Preventing and Combating Torture (MNPCT), a body connected to the Brazilian Ministry of Justice, but which operates independently. In December 2015, these experts visited Compaj, as well as three other prisons in the capital of the state of Amazonas, in the north of the country.

“We interviewed several people, including prisoners and staff, who confirmed that their lives were in danger and a massacre was imminent," says Catarina Pedroso, one of the experts who visited the site. She says that the MNPCT’s visit was motivated, "among other reasons, by warnings about the seriousness of the situation made by several organizations, such as the UN Subcommittee on Prevention of Torture".

At the time of the MNPCT’s visit, Compaj had been under the management of the Umanizzare company since June 2014. Pedroso reports: "We saw overcrowded conditions, which are, in my opinion, one of the key aspects of the problem, since they increase tension between prisoners and make the conditions of detention even more degrading. There were several people housed in improvised conditions in places that put their lives in danger. In addition to this, we observed people being tortured by prison staff using physical aggression, without any investigation being carried out or those involved being held to account.” Pedroso also recalls that prisoners held in "solitary confinement" because of having committed crimes that are not tolerated by the other inmates, or for being military policemen, were in improvised accommodation, where their safety was at risk.

Why privatization simply aggravates the crisis in Brazilian prisons 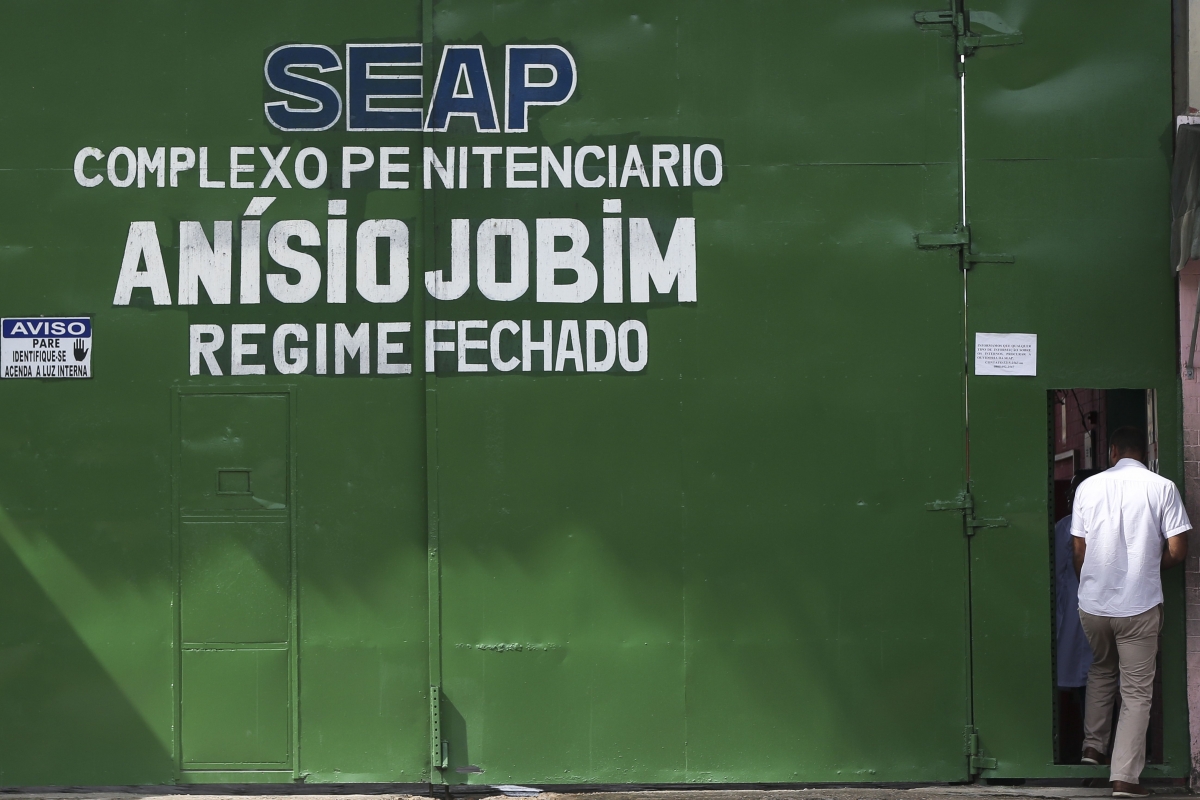 Pedroso reports that in the outsourced prisons in Manaus visited by the experts from the National Mechanism for Preventing and Combating Torture, "the situation as regards medical, psychosocial and legal attention was very serious." Legal assistance was proffered by lawyers hired by the company, which, in the opinion of the expert, led to a risk that allegations of violations of prisoners’ rights might not be taken up.

Besides Compaj and the Provisional Detention Centre for Men (CDPM), managed by Umanizzare, the other prisons assessed were the Manaus Women's Penitentiary (PFM), administered by RH Multi Serviços Administrativos, and the Judge Raimundo Vidal Pessoa Public Prison (CPDRVP).

Another problem arising from outsourcing is the lack of adequate training of employees who have to work as prison staff. According to Catarina Pedroso, staff salaries on the date of the visit to the units under the management of Umanizzare in Manaus, including additional benefits, were approximately 1,700 reales (US$ 545 at the rates as of 9/2/17). "The prison staff were working under a double threat: that of being attacked by prisoners, even outside working hours, and that of losing their jobs, so there was a high staff turnover. Therefore there are conditions present which can lead to exacerbation of violence and torture within the prison environment."

“So conditions in the privatized prisons were very similar to those under state management, but are aggravated by the fact that the working conditions put employees at risk and promote violations of people’s rights,” she concluded.

In fact, in December 2016, prison staff hired by Umanizzare complained about low wages and poor working conditions. Elizeu Silva Pereira, president of the Union of Subcontracted Staff of the State Prison System of Amazonas (SATSPEAM), told the press that "for over 11 years subcontracting companies have been violating our labour rights."

The MNPCT published its report on visits to prisons in Manaus in January 2016. "As regards what we found in Compaj, we tried to explain how serious the situation was, and how deaths could occur imminently," explains Catarina Pedroso.

Besides describing the situation and warnings about imminent deaths, the document indicates that "the State does not effectively exercise its primary function of legitimate monopoly of force and does not carry out effectively its task of supervising the enforcement of sentences ". Among the recommendations to the state government of Amazonas is the need to develop a plan to reduce the prison population. "However, we have not received any response from the Amazonas state government regarding these recommendations." 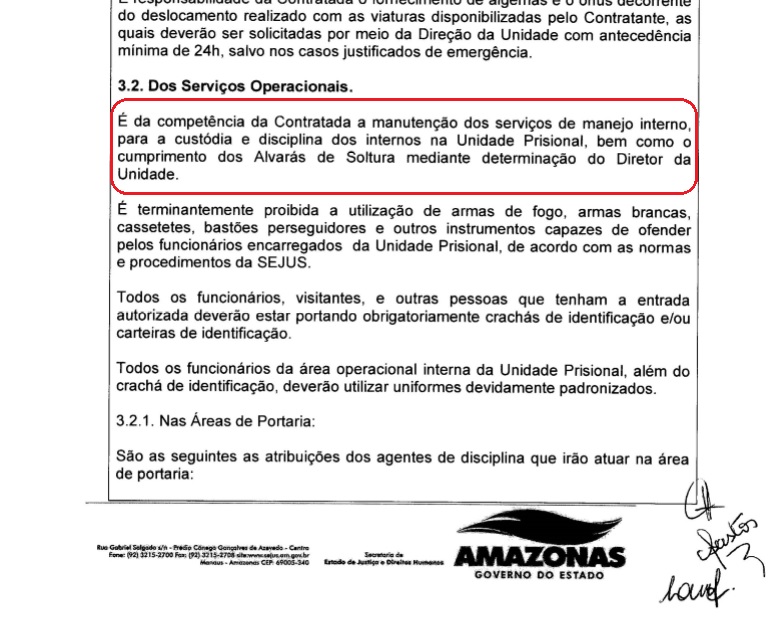 In a statement sent to the press with regard to the massacre at Compaj, Umanizzare said that it only provides cleaning services, social and legal assistance to prisoners, and electronic surveillance. The activities of control, discipline, the use of force, security and armed surveillance of inmates would be the responsibility of the government of the state of Amazonas. According to the Law on Sentence Enforcement, the State cannot delegate to private companies the functions that constitute policing power.

However, in the contract signed by Umanizzare and the Ministry of Justice and Human Rights (SEJUS/AM) -  on March 31, 2015, the Secretary of State for Penitentiary Administration in the State of Amazonas (SEAP/AM) became the titleholder of the government’s agreement - it is determined that "services must be provided in accordance with the specifications of the Basic Project, which becomes part of this contract".

Article 3.2 of the above-mentioned project is explicit: "It is the responsibility of the contracted party to maintain the internal management services, custody and discipline of the inmates in the Penitentiary Unit, as well as complying with the permits for release if so determined by the Director of the Prison".

Also according to this document, the company must carry out the services of reviews of inmates, staff and visitors, "undertaking the safeguarding and internal management of penitentiary establishments, maintaining order and discipline, always under the supervision of SEJUS", and "management and keeping order during the provision of services, exercises, classes, sports games and other related activities", besides other duties assigned.

It is also indicated that employees of the company contracted are expected to be members of the Disciplinary Board, whose functions include "deliberation and proposals concerning the application of disciplinary sanctions".

According to Paulo Malvezzi, legal adviser to the Prison Ministry, who visited the Compaj, the workers outsourced by Umanizzare in fact carry out tasks relating to security and discipline: they are in charge of control within the prison, are responsible for internal transfers of prisoners and supervise their behaviour. Malvezzi commented: "If there is a representative of the state validating the actions of these employees, it is only a formality. In any prison, whether privatized or state-owned, those who carry out the functions of the police are those who spend every day in the hallways and lobbies, and are in direct contact with the prison population."

Up to the date of publication of this report, neither Umanizzare nor the State Secretariat for Penitentiary Administration in Amazonas (SEAP/AM) had answered the questions submitted to them.