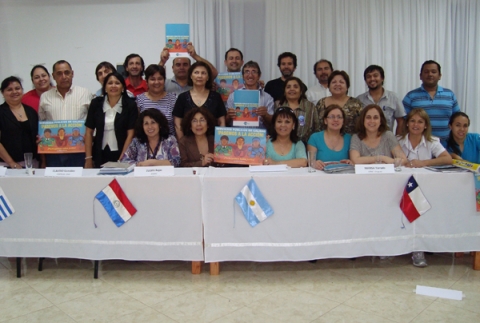 Paraguay must respect United Nations’ obligations and stop the mass firing and repression of workers.

The global union federation Public Services International denounces the non-renewal of contracts for 250 workers belonging to the Union of Nurses and Health Staff in Clinicas Hospital in Asunción, in August. These are professionals working in technical and administrative services including emergency, maintenance, pharmacy, laboratories, food and laundry services. Management has banned remaining union members from attending union meetings and has implemented an open campaign against union leaders.

Attacks on private sector workers
UNI Global Union alleges that the Franco government has actively conspired with Latin America’s largest private security company Prosegur in the firing of 327 low-paid private security workers who are union members. The Spanish multinational corporation Prosegur fired its entire unionized workforce in Paraguay on July 30, 2012. The Minister of Labour and Justice had offered to mediate between Prosegur and its striking workers. The workers were protesting against earning less than $600 a month and working up to 19 hours a day under dangerous working conditions. But when the workers agreed to the company’s and Minister’s suggestion to return to work to enable mediated negotiations – all 327 workers was immediately fired. Franco’s government has taken no action to ensure that Prosegur workers’ rights are enforced nor laid any penalties against the company.

The new Paraguayan President, Federico Franco, is speaking at the United Nations on Thursday, September 27 to seek international recognition and legitimacy for his embattled government. Along with taking power through what has been deemed a parliamentary coup, Franco’s new regime has been marked by immediate repression of unionized workers’ rights.  President Franco must respect Paraguay’s international UN obligations, and the rights of Paraguayan workers.

The International Labour Organization (ILO) is the arm of the UN responsible for labour issues. Paraguay is a signatory to ILO conventions on freedom of association and the collective bargaining of employment agreements. These international commitments, and the rights of Paraguayan workers, must be enforced by the Paraguayan government of President Franco.

Paraguay must comply with international UN obligations, ensure unjustly dismissed public and private sector workers, including those at Prosegur and the Clinicas Hospital, are immediately reinstated to their jobs, and stop the illegal intimidation and dismissals of unionized workers.