Political will is required to get rid of malaria

On Wednesday 25 April, PSI affiliates join the World Health Organization (WHO), governments, and civil society organisations to observe the World Malaria Day 2018. The day serves to provide information on the year-long implementation of national malaria-control strategies, including community-based activities for malaria prevention and treatment in endemic areas.

The theme for this year’s World Malaria Day is “Ready to beat malaria”. The important role of the World Health Organization in supporting countries to roll back malaria for the past seven decades is highlighted, with progress made thus far. The challenges that still lie ahead have also been brought to the fore, but with renewed confidence in the global community’s ability to make malaria history.

Malaria is a life-threatening disease caused by Plasmodium parasites, transmitted by infected female Anopheles mosquitoes. Populations in tropical areas are susceptible to the disease, with half of the world’s population at risk. It is endemic mainly in Africa, where 90% of malaria cases and deaths worldwide is recorded.
Great need for continious malaria funding
According to Dr Tedros Ghebreyesus, Director-General of WHO in the World Malaria Report 2017 the global response to malaria was considered one of the world’s great public health achievements, for many years. But there has been a troubling shift in this trajectory in recent times. Less than half of the countries with ongoing transmission are presently on track to reach critical targets for reductions in the deaths and disease caused by malaria.
A major reason for this dire situation is inadequate investment. “A minimum investment of US$ 6.5 billion will be required annually by 2020 in order to meet the 2030 targets of the WHO global malaria strategy. The US$ 2.7 billion invested in 2016 represents less than half of that amount. Of particular concern is that, since 2014, investments in malaria control have, on average, declined in many high-burden countries”, as Dr Ghebreyesus further notes.
Contributions from governments of endemic countries to the US$ 2.7 billion was just US$800 million, amounting to barely 31% of investment in the malaria response. This situation underscores inadequate political will that cannot but undermine the assumed readiness to beat malaria.
PSI: Member states of WHO can do much better
Rosa Pavanelli, the PSI General Secretary observes that:

There are two levels at which we can understand this problem of inadequate funding. On one hand, most of the countries affected are rich in natural and human resources but the states have lean purses because multinational corporations refuse to pay their fair share of taxes. There is an urgent need to enthrone tax justice to promote adequate domestic resource mobilisation.

On the other hand, these member states of the WHO can do much better than they have done even with the resources presently available to them, if they prioritize the funding of public health systems and stand by earlier pledges they made to the people.

The international community is responsible for attaining universal health care
Fourteen of the fifteen countries that carry 80% of the global malaria burden are in sub Saharan Africa. In 2001, member States of the African Union issued the Abuja Declaration and Frameworks for Action on Roll Back Malaria. Where they pledged to commit not less than 15% of annual budgetary provisions to public health. Less than 10% of these governments have thus far upheld this pledge.
The international community as a whole is a responsible for attaining universal health care. This requires reform of the architecture of global governance, which restores the norm of people over profit. However, this equally entails all governments living up to their obligation to the people they represent.
Health workers and communities in Africa and worldwide are ready to beat malaria. But the political will of governments to concretely commit to health for all by providing much needed funding of public health and the active involvement of trade unions and communities in health governance is of fundamental importance to roll back malaria conclusively.
The simple measures to protect yourself and your family

Mosquitoes are one of the deadliest animals in the world. Their ability to carry and spread disease causes hundreds of thousands of deaths every year. If mosquitoes are around you, there are ways to protect yourself and your family. 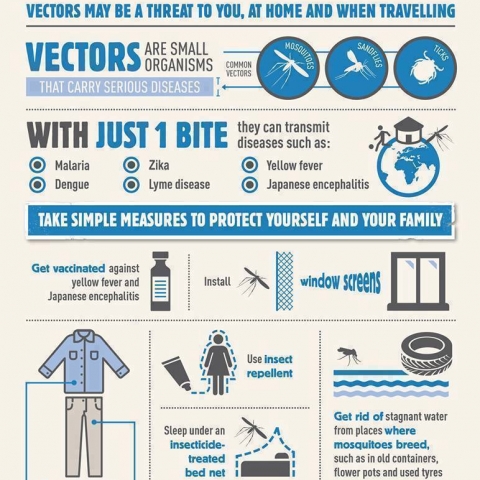