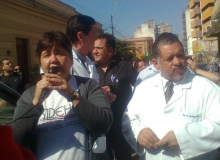 The Union of Nurses and Health Staff in Clinicas Hospital in Asunción has denounced the non-renewal of contracts of 500 workers. These are professionals working in technical and administrative services including emergency, maintenance, pharmacy, laboratories, food and laundry.

"We strongly reject the way that the Paraguayan State wants to split health staff of this hospital, especially for the struggle that we have upheld against job insecurity," said the president of he Union of Nurses and Health Staff in Clinicas Hospital (SIDEHC), Zulma Rojas.

The trade union leader explained, "This situation affects not only the contractors who have lost their jobs, but also new staff that will have to fill those jobs, and users who will see a reduction in responsiveness and coverage of various services of the hospital. "

To these dismissals the union adds anti-union practices, also denounced by Rojas. She reports that  the Head of the Nursing Department has banned union members from attending SIDEHC union meetings and has implemented an open campaign against the union leaders. Management is refusing to receive union representatives despite the international conventions of the ILO freedom of association which Paraguay has ratified.

"Management has even included a condition saying that if staff join the union, they will not be promoted in their positions," said the president of SIDEHC, a situation that the union rejects absolutely.

Finally, the union leader has called on the national authorities and the Paraguayan President himself, to end this situation, arguing that "no nation can develop in the presence of arbitrary leaders and precarious work."