March 22, 2018, was a very disappointing day for the international trade union movement.

On that day, the ILO Governing Body adopted the pay cut for the ILO’s professional staff, as decided by the International Civil Service Commission (ICSC), in a move that undermines the trust and credibility of the ILO as an international labour authority.

What is further troubling and unacceptable is that the Chairperson of the Workers' Group supported this decision, when it is widely acknowledged that:

It was with dismay and disbelief that we learned after the GB session that the ITUC stated:

“The Governing Body couldn’t prevent the application of the ICSC cut, but called for reform of the methodology, with the full involvement of the unions representing the UN workforce and respect for the basic principles of social dialogue.”

For those who participated in the GB, it was clear that preventing or deferring the implementation of the pay cut was possible.  An alternative text was discussed, which did take into consideration the concerns and demands of ILO staff. This better alternative was supported by the Employers’ Group – creating a great public relations opportunity for themselves while undermining the Workers’ Group role as the voice of workers within the ILO. 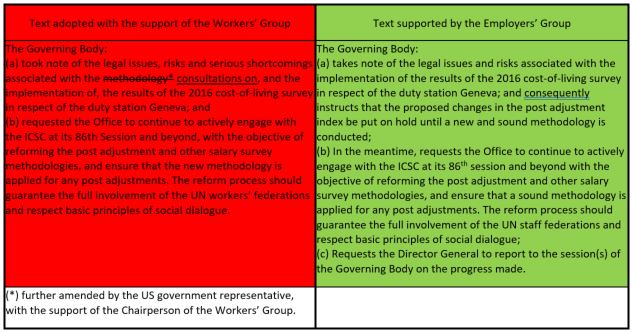 It is well known that the ILO Staff Union is an active affiliate of PSI – however the Chairperson of the Workers' Group did not consult PSI on this decision, which directly affects our affiliate’s members, violating fundamental union principles of democracy and consultation upon which our movement is built.

Moreover, it was regrettable how this was handled in the GB – rushing things to reach a quick decision, without a clear majority.

As a result, ILO staff went on strike on 22 and 23 March – PSI and other members of the trade union movement were standing with them. It was unfortunate to note that the leadership of the Workers' Group did not attend the extraordinary ILO Staff Union meeting where the strike was voted nor did they stand with striking workers those days.

The global trade union movement continues to face a series of well-coordinated attacks across the globe and within the ILO itself. Our ability to defend workers’ fundamental rights requires inclusion, unity and above all democracy.

It is necessary to avoid further accidents with potential dramatic consequences; therefore, we believe that an urgent discussion to address these issues well in advance of the ILC 2018 and the next ILO Governing Body is now required.