NO to Privatisation of Ambulatory Surgical Care at HUG

In a solidarity letter to SSP, Rosa Pavanelli, PSI General Secretary commended the principled stance of the union. She noted that, this step being taken by the hospital’s management “is a major assault on health as a fundamental human right, which will also have dire consequences on the terms and conditions of work for health workers”.

The Lausanne University Hospitals carried out a similar form of privatisation with dismal consequences for workers and the health system. SSP has been fighting against the privatisation of health services which the Geneva Council of State has been pushing for, over the last thirty years.

This initially took the form of outsourcing of non-clinical services, starting with cleaning services. The resistance led by SSP dammed the tide of this first wave of privatisation. Subsequently, pharmaceutical services were privatised, despite strident opposition by the union. 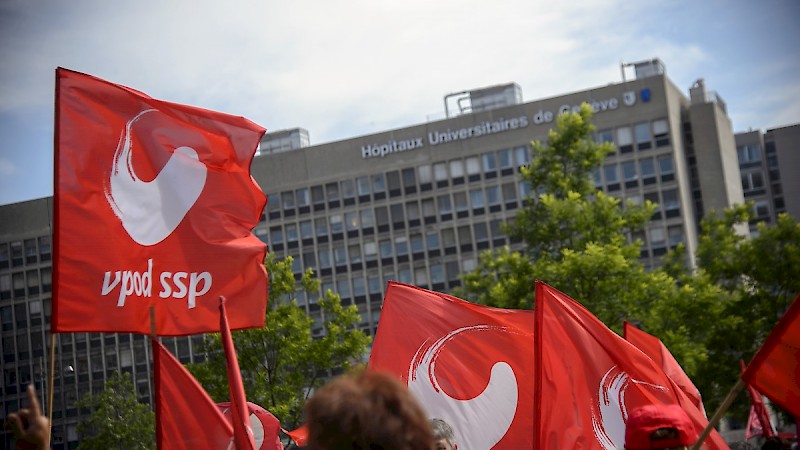 Precarious work has likewise become entrenched with HUG’s use of 1,200 temporary employees every year. They are underpaid and suffer inhumane working conditions. Permanent staff have also been confronted with labour flexibilization strategies by management.

A major example of this was the unilateral decision of the management to increase daily working time of operating nursing assistants from 8 hours to 10 hours last June. The workers organised a fightback. SSP wrote several letters to management demanding a reversal of this decision and the operating theatre nursing assistants organised a demonstration. Victory was won and the 8-hour working time was reinstated.

This victory was inspiring for the workers. But management did not give up with the pursuit of policies that will undermine universal access to quality healthcare and workers’ rights, to the benefit of profit for business interests in health, as reflected by this new assault of privatisation.

It rather decided to be too clever by half, presenting the moves to privatise ambulatory surgical services as some form of “social partnership”. But, this new policy was reached without any form of social dialogue. And it will also not be in the interest of most people resident in Geneva.

If this policy is successfully implemented, field health workers presently employed by HUG will be at the mercy of considerations of profitability which the private investors will place first over any other consideration, as is inherent with business interests.

Along with ambulatory care givers, laboratory technologists, radiologists, dieticians, transport staff, security personnel and other related workers will come under the hammer of precarious work.

But SSP and its members have a rich history of struggle and solidarity in the recent period, to inspire their fightback. After the victorious fight against extension of working time in October, they mobilised in solidarity against outsourcing of social care services to the elderly in the Etablissements Médico-Sociaux, EMS (residences for the elderly). Scores of workers walked out, with many joining pickets in defiance.

The struggle continues until victory. Rolling back the rising spate of privatisation in different ways can be achieved only with ceaseless struggle for people over profit. PSI will give every possible support to SSP in its mobilisation to stop privatisation in HUG. PSI and its affiliates all over the world will not relent in challenging PPPs and all forms of privatisation.