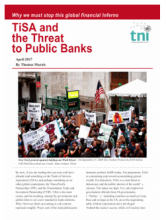 Two new reports released this month by Transnational Institute (TNI) highlight the significant dangers which the Trade in Services Agreement could pose to State Owned Enterprises and Public Banks as well as examining the successful campaign in Uruguay to exit the negotiations.

The first briefing is about how the Trade in Services Agreement (TiSA) would be an attack on the future publicness of public banking around the world. Despite 30 years of privatisation, publicly owned banks remain active in most countries and communities. Yet the importance of TiSA to the future of public banks has yet to be raised as a fulcrum of resistance.

By privileging a private, profit-oriented vision of financial services over the public good and public provisioning, TiSA will impact public banks’ mandates and capacities to serve the public interest, directly and indirectly, now and in the future. In this way, public banks will be pressured to internalise the interests of a global, private, corporate elite by forcing their activities into increasingly narrow competitive market logics – this being a precursor to eventual bank privatisation.

Again, we do not claim that public banks are perfect, but they do a lot of good. And today many civil society organisations are doing important work to improve and make them more accountable. TiSA will only undermine public banks’ potential. In short, public banks continue to offer viable, desirable, and defendable alternatives to neoliberalism and financialisation, and they are an alternative that needs protecting from TiSA in the public good.

The second briefing discusses why Uruguay withdrew from the TiSA negotiations, to show how under TiSA State-Owned Enterprises would be obliged to abide by commercial considerations.

It explains how TiSA seeks to limit the role of State-Owned enterprises as potential agents of productive and technological development, by expressly prohibiting the possibility of discriminating in favour of national suppliers. In Uruguay SOEs have played a key role in modernizing sectors that are strategic for productive development, such as energy and telecommunications.

Uruguay’s withdrawal is significant for other countries because it shows that it is possible and beneficial to break free from the TiSA process.

PSI is in the process of producing an expanded report on the Uruguay withdrawal to serve as a tool for campaigners in other countries who wish to see their government exit the TiSA negotiations.