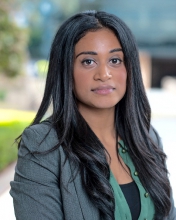 Ashvini is a Junior National Industrial Officer in the Electrical Division (The Electrical Trades Union of Australia) of the CEPU. Her work includes industrial advocacy, research, submission and policy drafting. She has a strong passion for championing workers’ rights, the union movement and ensuring that issues impacting young union members are addressed.

Before embarking on her legal career in the union movement, she practiced as a prosector and taught human anatomy at the University of Sydney for seven years. She looks forward to carrying on the excellent work Ms. Rowsell campaigned for young members from the region and working with all the youth representatives within PSI.

Seven affiliate members attended the Youth Network session during the Oceania Sub-regional Advisory Committee (OSRAC) meeting in Sydney, Australia on 22 July 2015. Participants discussed some of the challenges that young members face in their sub-region. Representatives included affiliates from the Cook Islands, New Zealand and Australia. Discussions focused on how to get young members to take up leadership roles within their union and how other affiliates encourage young workers to become more involved in the union movement. The issue of young workers in the Pacific being pressured to move to other countries to look for work opportunities was also discussed.

Reflecting on the resolutions passed by the youth network in the 2014 OSRAC meeting, a major issue that was raised was the need to improve communication among youth representatives. A motion by Ms Ashvini Ambihaipahar (CEPU) and seconded by Mr Thomas Hoffman (NSWNMA) stated:

“That OSRAC affiliates nominate a designated youth representative to participate in regular telephone conferences (or by other means such as Skype) to work towards the Youth Network work plan.”

The Youth Network will have their first teleconference in August to further discuss the goals and action plan on how to strengthen the youth network of the Oceania Region.