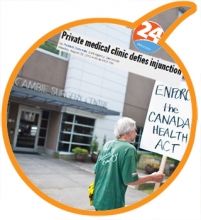 PSI affiliate, The National Union of Public and General Employees (NUPGE), Canada, has released an update of a report on privatisation and emerging threats to public services—New Forms of Privatization. While privatisation schemes may be changing, the motivation has not. “Privatisation is still about helping wealthy corporations or individuals make a profit at the public’s expense,” said Larry Brown, NUPGE President

In the last few years, the privatization industry has put a lot of effort into coming up with new ways to privatize public services.

These new methods of privatization have dramatically expanded the number of public services threatened by privatization. They are also being used to repackage older, discredited privatization schemes.

The updates to the report, New Forms of Privatization, published by the National Union of Public and General Employees (NUPGE), provide information on emerging threats to public services. But while privatization schemes may be changing, the motivation has not.

Instead, the privatization industry is busy coming up with euphemisms for privatization. In Ontario, for example, privatization of electricity distribution was described as “asset recycling” or “broadening the ownership.”