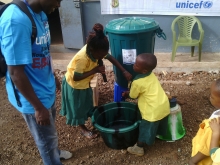 In the first stage of the strategy, the health unions focused on collecting information in order to elaborate their union demands on proven data. A survey was carried out to collect data on payment of wages and hazard fees to healthcare workers and the financial support for the families of deceased healthcare workers. [This article is an extract from the 2016 Update "PSI trade union response to the Ebola Virus Disease".]

A survey was carried out to collect data on payment of wages and hazard fees to healthcare workers and the financial support for the families of deceased healthcare workers, especially since serious problems were detected in all three countries. Interestingly enough the hazard fees fund was provided by the World Bank, but it is not always clear what the money was used for.

In Sierra Leone, hazard payments were being paid as a result of intense negotiations between unions and the relevant government associations. The volunteer payment and the hazard pay falls partly under the responsibility of the Ministry for Health and Sanitation, which is responsible for the elaboration of the list, and partly under the National Ebola Response Centre (NERC), which is responsible for the payments. However, after the military authorities took over the national response, everything was suspended resulting in names of essential staff members being removed from the pay list and serious delays in payments. This led to spontaneous strikes by staff members, but unions and government jointly made sure services were not interrupted.

There were also many problems with the payment of wages of healthcare workers except in centres operated by external organisations such as DFID and NGOs, where payment was secured, as they pay for the employees in their own centres. Because of the many problems, and to prevent healthcare workers to go on strike or just not showing up to work anymore, UNDP became the technical advisor for the development of the system for the payments of the National Ebola Response Centres. This included controlling the lists and ensuring the right people got paid at the right time. The UNDP staff also observed irregularities: in some localities, every month a number of names were removed or added to the list.

There are still issues with the payments of wages too. These are being totally ignored by the Liberian government although the Ministry of Health is fully aware of the fact that some health workers’ bank accounts were wrongly entered into the system and have therefore not received any financial compensation. Some health workers’ names were omitted and because of the bad organisation of data, the government has, on occasion, had to pay workers three or four months’ due wages and/or hazard pay at a time. The government never gave the healthcare workers enough time to deposit a claim about the non-payment of salary and hazard pay. The deadline was given with too short a notice for most of the healthcare workers assigned in hard to reach areas. Many did not even hear about it before the deadline was over.

Although the government claims to have paid all public healthcare workers, contact tracers, and response team workers, unions want to know for a fact how many healthcare providers were paid and are demanding the creation of a neutral body with representatives from both the government and the workers’ leadership, in order to validate the figures. The unions are also calling for an extension of the deadline for the claim declaration in order to allow those in hard to reach places to hear and respond to the call, and give also to those in the private sector the chance to check their payments once they’re finally made.