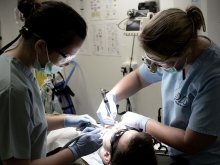 A former dental nurse in Norway, Bertha Regine Serigstad has won her case against the Norwegian state in the Supreme Court. Many legal experts are already saying that the ruling sets an important precedent and may turn out to be as important for these women as the asbestos ruling was for a number of men some years ago.

This very important ruling by the Supreme Court looks likely to be a breakthrough for female-dominated workplaces. It has finally been established that mercury is harmful to health and that it made dental nurses ill.

The Norwegian Union of Municipal and General Employees (known in Norwegian as Fagforbundet) took on the case on behalf of a group of dental nurses. It won the case and was awarded costs.

The case for occupational injury compensation was fronted by former dental nurse Bertha Regine Serigstad, who was left speechless with joy when her lawyer Anne-Gry Rønning-Aaby phoned her with the news yesterday.

“This case has been a heavy weight on her shoulders for many years,” acknowledges Rønning-Aaby, who took the case right from the Social Security Tribunal, through the Court of Appeal, and finally to the Supreme Court.

“It is a breakthrough case for these women, just as asbestos was for many men some years ago. There is reason to believe that this ruling may open the door for other similar cases concerning occupational illnesses,” says the delighted lawyer.

For now this court ruling has consequences for all the dental nurses who prepared mercury amalgam and came into contact with mercury vapour daily in their work. The Union represents over 100 of these women.

In particular it means that Serigstad will have her disability pension calculated in a more favourable way, which will also have a beneficial effect on her retirement pension. In addition she has been awarded compensation for permanent injury of 1–3 G, i.e. between NOK 85,000 and NOK 255,000 (€10,000–€30,000).

The task remains of calculating how much the Norwegian state owes each dental nurse. The amount may differ from person to person, depending on how long they worked, their workplace’s insurance and whether they were union members.

There is now a great deal of interest concerning the fundamental scope of the ruling.

The Supreme Court’s written ruling is not yet available. However, the Court of Appeal’s ruling established that there does not need to be “one set of symptoms and indications” for there to be an occupational illness; the illness can present in different ways.

It is expected that the ruling may benefit a number of female-dominated workplaces where employees may be afflicted by lung diseases, asthma, allergies or chronic obstructive pulmonary disease, or where they work with x-rays.

In general there has been little research into occupational illnesses linked to typically female-dominated workplaces. However, in this mercury case the victims enjoyed the coordinated support of a professional medical environment.

“Fantastic, this is just fantastic.” This was the reaction of Mette Nord, union leader. “The fact that these women have finally been believed is important. But it is very sad that it had to take such a long time. Many of the women that this case was about are no longer alive,” she points out, adding that the fact that the state appealed the case to the Supreme Court means that this ruling is now carved in stone.