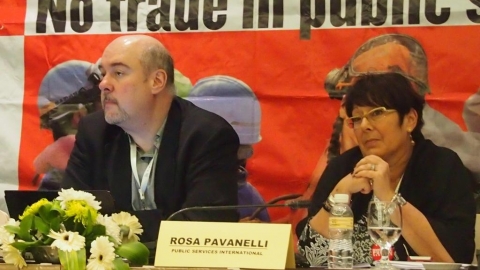 The official package agreed in Bali and released with great fanfare on 7 December demonstrates how unbalanced the global trade agenda still is.

The WTO continues to be unable to craft trade policies that serve development and are consistent with the most important issues for the world’s poor, such as food security.

While India’s refusal to accept a temporary solution on food security has been addressed, the terms of the deal are much less favourable, leaving many other developing countries vulnerable in the medium term, with only a much watered down LDC package in return.

The USA and Europe’s refusal to deal with longstanding issues required to address food security leaves little room for the developing world to gain from future talks.

The commitment to end export subsidies and cotton production subsidies in the USA agreed to in 2005 have yet to be implemented and continue to be delayed with no plan for resolution.

The Least Developed Countries (LDC) package which had already been weakened substantially before Bali has remained unchanged. Negotiators failed to strengthen it in Bali and fail to provide an improved LDC package that will have a real impact.

A serious commitment to addressing developing world needs and to address the food security of the world’s starving would look very different.

A permanent solution is still required to deal with the many countries who are still locked out of a range of food security measures because of the onerous conditionality’s attached to the clause.

The continued squeeze on national governments’ ability to determine their own policies in the trade facilitation agreement is bad for workers, public services and development.

The binding commitments of the trade facilitation deal will require some of the poorest countries in the world to invest in expensive ports, customs’ processes and machinery to facilitate developed world imports.

Previously standard options for LDCs to adopt less onerous rules have been discarded forcing them to adopt the same rules as the developed world but with longer time to implement.

Implementation by LDC governments, who already struggle to collect sufficient revenue, will require redirection of scarce government resources away from desperately needed health, education and public infrastructure such as water and energy.

Yet there is no clear road map for how these economies will restructure to deal with significant increases in foreign imports. This risks economic dislocation in some of the world’s most vulnerable economies while bleeding resources from basic services to the poor.