Martha was on the forefront of the fight against Ebola. Now she is worried if Liberia will be able to handle another outbreak. 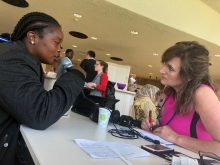 Nurse Martha Morris, 35, worked in a public hospital in her hometown when the Ebola virus raged through Liberia. She gave up a lot to fight for better working conditions for health workers. It's a cause she thinks is worth continuing to fight for.

This article was first published by the Norwegian website frifagbevegelse.no

Martha is smiling at the Labor Conference in Geneva, but behind her smile there is an incredibly strong story. About death, suffering, not being able to spend time with her own son and many years without pay and recognition.

We have 10,000 members and we are part of Public Services International (PSI), but our trade union is still not fully recognized by the Liberian government. But things might be changing. The other day PSI arranged a meeting with the Labor Minister of Liberia. That is something that gives us hope for a better future, said Morris.

She has fought hard for her colleagues' rights, but she knows that the struggle is not over. She also worries if the country will face a new epidemic.

We can't afford to lose more health workers to the epidemic. Today we don't have enough training, proper equipment or protection for our hospital staff to fight another outbreak, says Morris.

Morris is a shop steward for the National Health Workers Union of Liberia and has 12 years of experience in the healthcare industry. She is one of the employees' representatives at the ILO Labor Conference, which brings together more than 5,000 representatives from governments, unions and employers organizations around the world.

It's wonderful to be allowed to attend here: to observe, witness and participate in the political discussions. But most of all, I wish the international community will focus on what is happening in Liberia, she says.

Public health personnel had to work without proper protection

Morris remembers the unreal time and struggles they fought at home during and after the Ebola crisis.

During the crisis Martha was fighting for health workers conditions, demanding higher wages and protective suits. It was something the Government, as her employer, did not appreciate- along with 22 other union leaders she was fired. For 8 months, she continued to work at the hospital without getting paid.

Healthcare staff from Liberia never received the same protection as international aid workers - which is also the reason why they suffered greater losses.

Now with new outbreaks of ebola, Morris is concerned of the consequences if health professionals don't get proper protection.

The former government was working against trade unions and they didn't pay our wages so we would feel humiliated, she says.

Morris still works at the same hospital, but has never been compensated for the 8 months she didn't get paid.

I had a 3 months old baby at the time. When 11 nurses in the hospital I worked on died, I made a decision. I gave my baby to a cousin, and decided to fight for the health workers who worked around the clock to help their patients, she says.

During the period when Ebola was at its worst, she could neither touch her son or give him a hug. Family and friends were afraid because she worked fighting Ebola. They thought she was infected. She still has tears in her eyes when she thinks of the intense time back in 2014.

All of us who are health workers are ready, but we don't have the right equipment and protection. Newly trained nurses don't know how to handle an epidemic like Ebola, so they need training, she says.

She hopes that the Government understands the seriousness of fighting ebola and initiates measures to rebuild the health sector to handle a new situation.

In 2016, the annual ILO conference in Geneva addressed a complaint to the Liberian Government

Nothing has happened since 2016, so I'm surprised that the situation in Liberia is not being discussed here, says Martha C. Morris.

She is now getting paid and has the opportunity to spend time with her son. He is is now three and a half years old, but she still worries about his future.

For many years, I could neither see, touch or play with him. I hope he will understand that, like his mother, he must fight for his rights.

She wants to teach him that decent pay and working conditions don't come by themselves.

I am optimistic and I hope that our union will receive recognition from our government. We need better working conditions, more skills and we need to be more prepared for a new crisis in the health sector. Liberia can not afford more health workers to die. We are the front soldiers who will fight for the lives of the population in Liberia, she says.