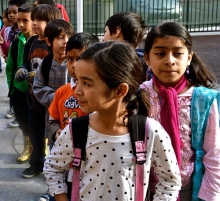 All of the rhetoric about “school choice” only obscures the real choice. Who do we want to control public education? Communities, teachers, and education professionals, or billionaires and owners of companies like Walmart?

Market forces are ripping apart school districts in the US. In a recent article, The New York Times detailed how privatization has devastated public education in Detroit, which among American cities has the second biggest share of students in charter schools. Of those schools, half perform only as well, or worse than, Detroit’s neighbourhood schools. The schools open and close almost overnight, and teachers and staff come and go just as quickly.

In a city where it’s “easier to find a charter school than to buy a carton of milk,” as the Times put it, there’s “lots of choice, with no good choice.”

In Los Angeles, “school choice” is costing the public school district hundreds of millions in taxpayer dollars a year as charter schools continue to grow in number mostly unchecked. Those schools aren’t providing much of a choice to some students—the percentage of Los Angeles charter school students with severe disabilities is less than one-third the percentage of similar students in the city’s neighborhood schools.

But some people want even more choice. Los Angeles’s school system has more charter schools than any other in the nation, but billionaire Eli Broad isn’t satisfied. A man that made a fortune in homebuilding and insurance, not education, wants to enroll half of the city’s public school students in charter schools within the next eight years.

Just last week, the Walton Family Foundation (heirs to the Walmart fortune), in the name of “school choice,” announced it will commit an additional $250 million nationwide to support charter schools. One in every four charter schools have received the Walton foundation’s support — but they want to see 250,000 more children in charter schools in the next decade.