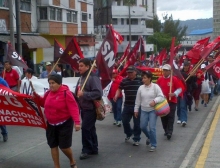 This campaign is now closed.

1 March, at about 18:30 hours, Santa Alvarado, 45 years old, finished her work shift in the kitchen of National Hospital Totonicapán. Moments after her husband picked her up, their vehicle was intercepted by armed masked men. The husband was threatened and thrown out of the vehicle. The car was found later and Alvarado was discovered inside strangled to death. She leaves behind two young toddlers. Alvarado was a member of the National Health Workers’ Union of Guatemala () which is affiliated to PSI. This follows on the murder of Carlos Hernandez Mendoza, executive member of SNTSG, on 8 March 2013. Some five other members of SNTSG were also murdered in the last year.

We have also learned that Kira Zulueta Enriquez Mena, General Secretary of the Municipal Workers of Nueva Concepción of the department of Escuintla, was assassinated at the library where she worked on 22 March.

In a further letter of protest to Guatemala’s current President (and former army chief), Pavanelli says, "We believe the shocking violations of human rights and international labour conventions in Guatemala provide grounds for suspension of the European Union Central American Association Agreement (EU-CAAA), particularly in regard to the EU's General System of Preferences. We are taking this claim to the EU Members of Parliament at this moment."

She adds, "A brutal campaign of assassination and intimidation is being conducted against our members and we demand justice in their names. We call on you to take immediate action to prevent any more deaths and to stop this bloody campaign against trade unionists which brings such shame to Guatemala."

On 21 February, Hernández received a death threat by phone, following a meeting where he had spoken out against deforestation in the region. Two members of the New Day Peasant Farmer Coordination, who also received threats, today fear for their lives. PSI has asked the government of Guatemala to ensure their safety.

In a letter of protest to Guatemala’s current President (and former army chief), Pavanelli says, “PSI condemns the murder of Hernández and any other act that violates the right of workers to freedom of association or otherwise hurts union comrades and their families in Guatemala. We demand that the Guatemalan authorities make immediate investigations in order to arrest and convict those responsible for this murder and related threats to other activists.

Pavanelli says, “PSI affirms our support for the initiative of our affiliate SNTSG to create an observatory to track the violation of human and labour rights in Guatemala. We will continue to denounce these crimes at the international level, and demand effective action against impunity.

“We believe the shocking violations of human rights and international labour conventions in Guatemala provide grounds for suspension of the European Union Central American Association Agreement (EU-CAAA), particularly in regard to the EU's General System of Preferences and special incentive arrangement for sustainable development and good governance, known as GSP+.”

SNTSG members have been targets of a murderous campaign over the past year. The union has exposed mismanagement of the country's public health facilities and filed an official complaint against the previous Minister of Health, accusing him of corruption. On 24 March 2012, four trade unionists were massacred, including SNTSG executive member Luis Ovidio Ortiz Cajas. On 7 August 2012, Ricardo Morataya Lemus, labour advisor for SNTSG, was assassinated and Melvy Lizeth Camey Rojas, Secretary General of the Department of Santa Rosa, was shot twice.

Pavanelli says, “We ask – how many more trade unionists will die before serious action is taken? We demand that Guatemalan and European leaders take immediate steps to stop all violence towards trade unions and their members in Guatemala, and to ensure their rights under international law are upheld. There can be no more trade without justice for workers and their communities in Guatemala.”