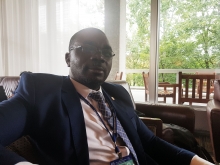 Thousands of young people make the perilous journey from Cote d’Ivoire across the Mediterranean to Europe every year. Theodor Gnagna, President of the National Platform for Public Sector Workers, says that establishing better work conditions in the country is an essential step in bringing an end to the exodus.

On the sidelines of the International Labour Conference, PSI is hearing stories of unionists from across the world, fighting for workers’ rights.

Interview with Theodor Gnagna, President of the National Platform for Public Sector Workers.

The Platforme Nationale is the newest incoming member of PSI - what sorts of issues would you like to see worked on?

In joining this International, one of the key issues we want to examine is migrant work. Many of our workers, - our people - are fleeing the country, looking for better work elsewhere. They travel to Libya where they are treated as slaves. When they arrive in Europe they often do not have the same rights - this is something we seek to work with European workers to achieve.

In the past, migration was not much of an issue for us. We had work, things were more stable. If we can bring quality work back to the country, and improve our education and professional training is improved, we can give young people hope - and a reason to stay.

In your analysis, what factors are contributing to the continuing instability?

Unfortunately there is still an element of colonialism. The French still have a very strong control over our country. When our previous government attempted to open up beyond French interests, the French backed a rebel group which started a civil war.

Can you describe to us the union activity which you have worked to establish?

The National Platform is a federation of unions in all of the sectors of public services - health, education, administration. Over 100 unions are affiliated. In January 2017 we carried out a general strike - for one month - for the first time in the history of the country. The goal was to stop the reduction of our pensions by over 30%. We stood up for older and retired workers who would face significant hardship as a result of these cuts. The strike ended after the government agreed to reduce the cuts from 30% down to 10%.

Another key victory we achieved was tackling precarious work in the public sector.

There were nearly 2000 workers employed in public services, through informal contracts without basic rights to pensions and other benefits.  This year we convinced the government to make them official workers, guaranteeing them the same rights and respect.

What are some of the benefits of joining PSI for you?

WE are looking for international partners in our fight - we need to have our struggle known, shared - and we look to learn from other similar fights. WE seek to exchange with others, to benefit from workshops and trainings and to help reinforce our leadership to bring new techniques of unionism to our country. With PSI’s position at the UN and ILO , we believe that they can help end the oppression and intimidation that we sometimes suffer.

Persecution  is a real issue. Four of our comrades have had their salaries suspended as a result of their legitimate trade union activities. The government will not let them return to work. We hope that by joining PSI we will dissuade the government from these forms of mistreatement.

We also want to push for an end to sexual harassment in the public services. Women face higher tax burdens and less salary.  We hope that at this round of the ILC, a Convention on this issue will be achieved.

The reality is that workers are organizing to fight back against the suffering our country is facing. This is the path to progress and we look forward to travelling with PSI on this.