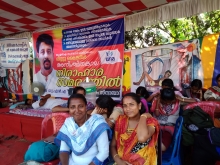 As the world celebrates women's struggle for equality, the inspiring struggle of nurses at the KVM Hospital in Alappuzha has now reached 200 days.

Alappuzha, India:  Under the banner of United Nurses Association (UNA), they are demanding the implementation of statutory wages and benefits and the reinstatement of 112 unfairly dismissed workers, 107 of which are women. UNA is an affiliate union with Public Services International (PSI)

Around 30 nurses take turns at the protest site just off the National Highway 66.

UNA wants an immediate end to the KVM policy of employing nurses as ‘trainees’ on less than minimum salaries and full time work. Says, Rejitha who has worked at KVM for five years. "At KVM, they took me as a trainee in 2013, and paid me half of the minimum wage. I had to renew my contract every six months, and after one year and a half, they gave me a permanent contract. Now I am paid the minimum wage of a fresher, despite 8 years of work experience" Not only is the trainee system used to deny workers their due wages, statutory benefits such as health insurance and pension schemes are also not accounted for.

Underpayment of women (in occupations in which they are in a majority) is one of the mechanisms of gender pay discrimination that contributes to women workers being denied equal wages.

Men and women nurses from other hospitals are also joining KVM struggle.

Lissu Michael, now on the tenth day of an indefinite hunger strike, says “KVM management has refused to even come for conciliation meetings called by the Government. As the strike extends, my colleagues are facing more pressure and hardship. They (KVM) think that as nurses are mostly women, we can’t fight back for too long. We want to show them that this is not true. This is why I am on hunger strike."

The Chief Minister of Kerala Pinarayi Vijayan has now called for a resolution. The next conciliation meeting mediated by his Government is scheduled for 14 March.

Irregularities at KVM affect both workers and patients.

“In a ward with 25 beds, we are only three nurses for the day shift, one for the night shift. This is not in line with the standard requirement of 1:6 nurse to patient ratio in general wards and 1:4 in special wards, as per SIU (Staff Inspection Unit) norms of 1991-92. Further, workers report that there is no proper fire safety, no proper waste disposal system and no water treatment plant. One wonders how is it that this hospital even got a green light from the municipality to operate, “says Rega from the UNA

The KVM strike started on 21 August 2017 as the management refused to enter into a dialogue regarding irregularities with regard to wages and working conditions.

Meanwhile, PSI has sent a letter to the Chief Minister arguing that the KVM management has failed to show its ability to run the hospital in accordance with the law and, if required, the government should intervene.

PSI will continue to stand in solidarity with the struggle at KVM.