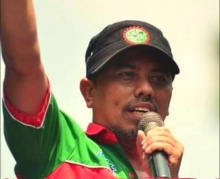 PSI demands the immediate reinstatement of Idris Idham, President of PSI’s Indonesian affiliate the Pharmaceutical and Health Workers Union (PHWU), who was unfairly dismissed in direct contravention of international law and Indonesia’s obligations. PSI has sent a letter to Hanif Dhakiri, the current Minister of Manpower of the Republic of Indonesia.

Idris Idham is elected National President of FSP FARKES Reformasi and mandated to serve from 2017 to 2022. He is also the Vice President of the national union center Konfederasi Serikat Pekerja Indonesia (KSPI).

A collective bargaining agreement (Perjanjian Kerja Bersama or PKB) was agreed by Rumah Sakit Islam Jakarta (RSIJ) Pondok Kopi and PUK FSP FARKES Reformasi RSIJ and governs labour conditions of employment. As President he is entitled to union leave and has honoured the agreed processes to undertake external obligations. He was dismissed for allegedly failing to use the finger scanning equipment. This incursion, if proven, is not a justifiable reason for dismissal. Instead this minor oversight has been used as a thinly veiled attempt at union busting.

PSI is demanding the immediate reinstatement of President Idris Idham.

Indonesia has ratified all 8 core Conventions of the International Labour Organisation in June 1998, including ILO Convention No. 87 on Freedom of Association and Protection of Rights to Organize. Indonesian Law no. 21/2000 on Trade Union/Labour Union provides that:

PSI urges the Government of the Republic of Indonesia to:

PSI stands willing to cooperate with your ministry, together with our affiliates in Indonesia, to ensure that ILO obligations are fulfilled and that social dialogue, rather than conflictual industrial relations, is used to address any conflicts.