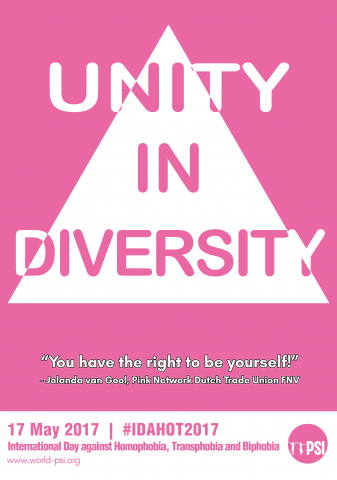 Today, on the occasion of the International Day against Homophobia, Transphobia and Bi-phobia, ITUC, PSI and EI jointly call on all trade union leaders to speak out against all forms of discrimination, and say “No more!” to the promotion of hate speech and falsehoods directed at LGBTI people.

The international trade union movement is strongly committed to the realization of all human rights, to promoting equality and solidarity within trade unions and in all societies. Unions play a key role in promoting the human rights and social inclusion of lesbian, gay, bisexual, transgender and intersex (LGBTI) people in the workplace and in society more generally.

Important progress has been made in the last decades. However, the need to challenge prejudice and ignorance remains acute in some contexts, and new challenges that few could have imagined some years ago, have emerged in other contexts. Trade union members are working and living in too many countries that criminalize homosexuality or same sex relationships, and transgender people still experience high levels of violence far too often, including violence in the world of work.

Today, on the occasion of the International Day against Homophobia, we call on all trade union leaders to speak out against all forms of discrimination, and say “No more!” to the promotion of hate speech and falsehoods directed at LGBTI people. We also call on unions to take a strong stand against set-backs in discriminatory laws and attitudes that roll back hard-won LGBTI rights.

We demand that governments promote public policies that foster equality, and penalise all forms of discrimination.

Two global trade union federations, Public Services International (PSI) and Education International (EI) have been at the forefront of the struggle to secure, protect and promote LGBTI rights and end workplace discrimination, harassment and violence since the release of the first joint publication EI and PSI working together for Gays and Lesbians in 1999 and 2007. These publications were designed to raise awareness of issues affecting lesbian and gay workers, and served as a tool for sharing good practices around the recruitment and mobilization of lesbian, bisexual, gay and trans workers. In 2004, EI and PSI established a joint forum, which met prior to several EI and PSI World Congresses (Brazil 2004, Vienna 2007 and Cape town 2011).

The next EI-PSI LGBT Forum will take place prior to PSI’s 30th World Congress in Geneva on 30 October 2017.

More trade union federations have prioritised LGBTI rights in the workplace, including integrating them within collective bargaining agreements, and establishing specific union bodies and programs to further such rights. We can do more.

In the current socio-political landscape, where LGBTI rights are embattled in so many countries, trade unions must continue to show clear and decisive leadership on protecting and furthering LGBTI rights.

“Many affiliates do a lot of valuable work that needs to be recognised”, said Fred Van Leeuwen, EI General Secretary.

Rosa Pavanelli, PSI General Secretary stated that “The trade union movement needs to develop joint strategies to combat discrimination and violence on the basis of sexual orientation and gender identity in the workplace”.

PSI will also be participating in the World OutGames Conference on Human Rights in Miami, 26-28 May. For more information please contact sandra.vermuyten@world-psi.org. 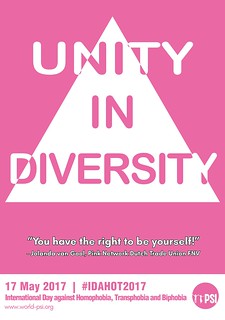 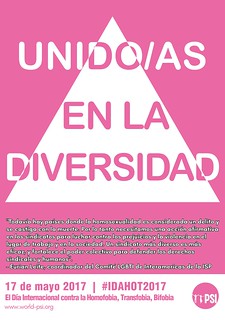 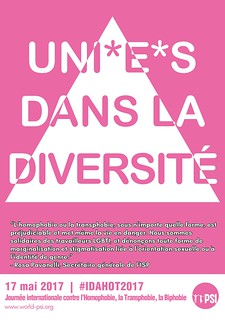 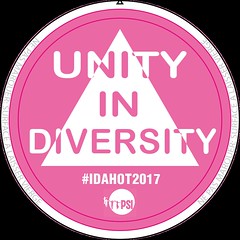 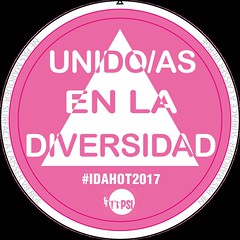 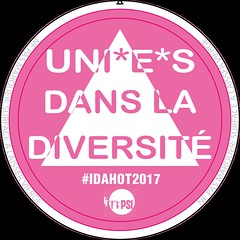 Also see what PSI affiliates are doing in their countries/regions: