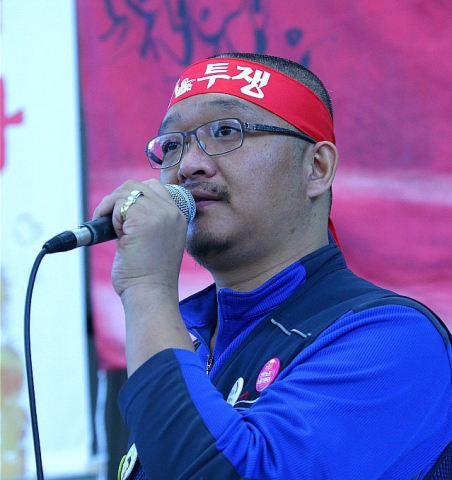 Global union leaders will be in court in Seoul tomorrow (26 July), to witness the latest in a series of unjust trials of South Korean union leaders. They will then report on what they have seen directly outside the building.

Update:  KPTU Vice President Cho Sung-deok was sentenced to two years in prison on 26 July 2016 for his supposed crimes related to the Mass People's Mobilisation last year, which as ITF president Paddy Crumlin said, amounted to at most causing a traffic jam. The ITF leadership's presence in Korea demonstrates the international trade union movement's continued support for KPTU's fight against anti worker labour reforms in the public sector and transport industry. 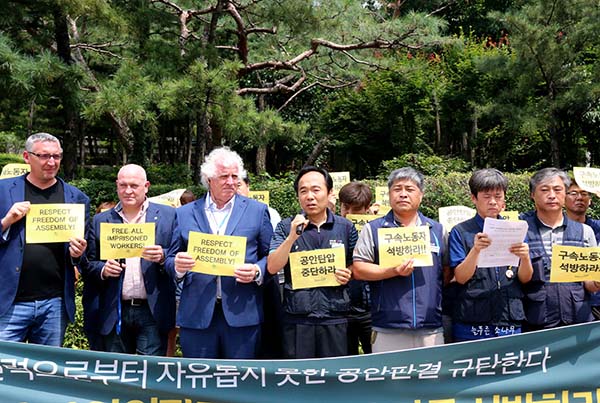 Cho Sung-deok is the latest person to be sentenced in relation to involvement in the mass people’s mobilisation on 14 November 2015 – the suppression of which by police who used 20,000 officers, 19 water cannon, 679 buses, and 580 pepper spray devices against peaceful marchers – has escaped censure in the courts trying other union leaders. (See http://goo.gl/86ESaF for more details). Just two weeks ago Han Sang-gyun, president of the KCTU union centre was sentenced to five years imprisonment on similar charges.

“Any prison sentence against this man would be unjust. Other trade unionists have received sentences of three or five years. Such a term would be unbelievably harsh, an attack not just on Cho Sung-deok as an individual, but on the entire Korean union movement for daring to expect to be able to engage in lawful trade union activities and to enjoy the inalienable right to freedom of assembly.”

Speaking about the trial so far Mr Crumlin added: “It’s difficult to know where to begin to list the problems in the trials against union leaders. But how about the way the judges have condoned the heavily organised police suppression of the rally?”

“This court case is part of a wider crackdown on the democratic labour movement in Korea which is clearly designed to punish unions for their legitimate opposition to the government's planned labour reforms. That fight will continue, with transport workers and their unions at the centre of the struggle, including potential strikes in rail and road transport later this year. Transport unions and their unions are helping to lead the resistance, with the admiration and guaranteed support of the entire ITF worldwide.”

Other global union leaders have echoed the call for justice and an end to the persecution of Korean trade unions.

"We need to fight back against the continued repression of legitimate trade union activities in Korea and we urge the government to immediately drop the charges."

"In Korea we are witnessing a purge worthy of a dictatorial regime, in which the government imprisons any dissenting voice that opposes its one-dimensional view of the world. The trial against Vice President Cho and other union members is a proof of that. If today trade unionists are the main target, be sure that tomorrow others will follow. The world needs to acknowledge this and act now.”

“Cho Sung-deok is being prosecuted for speaking out against labour reforms that will impact the lives of South Korean workers and their families. This prosecution is part of a larger attack on the entire trade union movement in the country. In June of this year 15 leaders of the tower crane branch of the Korean Construction Workers’ Union were found guilty under criminal charges for simply engaging in collective bargaining negotiations. Instead of attacking workers for exercising their fundamental democratic rights, the government should investigate and act against the brutal over-violence exercised by the police. We must all stand up against this witchhunt of trade union leaders in South Korea and crackdown on workers’ rights.”