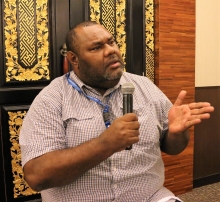 20,000 Government and global financial leaders met in Bali, Indonesia, as the World Bank and the International Monetary Fund held their Annual Meeting on 12-14 October 2018.

“As nurses we have a responsibility to know what the impact of PPPs might be for our communities and the workers,” said Mr Tatukivei. His inquiry comes at an important time as Fiji enters into National elections in mid November.

PPPs have received bad press in recent times with several reports showing that PPPs in healthcare are failing. Taking Back Control, a report from an inquiry in Australia outlined failures in over nine examples of healthcare PPPs and wholesale privatisations. And a report by Eurodad, History RePPPeated provides a case study of hospital PPP failures in Sweden and Lesotho.

According to Eurodad Lesotho’s experience supports international evidence that health related PPPs can be extremely risky and costly. The report suggest that healthcare PPPs should be avoided, especially in low-income, low-capacity contexts where they can constitute a threat to the entire health system. The Taking Back Control report demonstrates that when healthcare privatisations fail it comes at great costs to the community, in both health outcomes and financially as the state is left to pick up the pieces.

It’s not just the usual suspects denouncing PPPs. The International Monetary Fund’s own analysis demonstrates that the benefit of privatisation is usually only an “illusion” and highlight that privatisation has left the UK in a poor fiscal position (see reports in the Independent and the Guardian for further comment). The IMF has repeatedly come out and said there is not a good business case for PPPs as they create hidden liabilities for governments.

And yet the World Bank continues to push privatisation and PPPs, making it a condition of loans and key reform targets.

“We don’t know why our government has been recommended to privatise Lautoka and Ba hospitals through PPPs,” said Mr Tatukivei. “We are often told the PPPs are not a form of privatisation, however the information I have gathered from attending these meetings make it clear that PPPs are a version of privatisation. The community and healthcare workers in Fiji don’t know enough about what PPPs will do to healthcare. I will take this information back to Fiji to discuss with the unions, communities and relevant government ministers."

PSI has been working with the Fiji Nursing Association and the Fiji Public Service Association, both of whom cover workers in Fiji’s public hospitals. Workshops on privatisation and campaigning have been run with the unions focusing on taking the message to their communities.

Climate change is seeing a rise in infectious diseases, and non-communicable disease rates are amongst the highest in the world, making health care a key issue for Fiji’s future.

Healthcare workers in Fiji are trained to a high standard and many decide to work overseas where they can obtain higher wages and better working conditions.  According to the FNA, more Fijian nurses work in Australia and New Zealand than work in Fiji.

In Fiji, nurses, like all public sector workers, are on 1-5 year contracts, with yearly performance appraisals linked to pay increments and advancement.  At the end of the initial contract, healthcare workers must reapply for their job in an open competition environment.  These working conditions will undoubtedly see more nurses flee the country as they seek security of employment.

Nurses in Fiji are concerned that their working conditions will limit their ability to be advocates for patients, and for the healthcare system as a whole. Those who speak up may well find themselves unemployed. This is a clear example of how trade union rights are an important component of public sector transparency and accountability.

Trade unionists in Fiji, however, face difficulties. Unions continue to have their core labour standards ignored, including the right to assembly or to take industrial action. Some government agencies, such as the firefighters, are setting up yellow ribbon unions in an attempt to de-unionise the workforce.

Despite these circumstances, union members are standing up for their rights. Unions have circulated petitions and fact sheets within communities in the lead up to the national election.  The unions are hoping their communities will stand with them in saying that health care is a human right and should not be for sale.