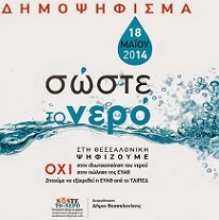 The privatization of the Greek water companies in Athens and Thessaloniki has been frozen. This was the news reported to the General Assembly of the Thessaloniki water company (EYATH) today. Workers representatives cheered the report that the ongoing privatisation of the public company is in direct conflict with a decision of the Council of State which had decreed that the privatization of the Athens water company sought by the Greek government and welcomed by Eurozone President and Dutch Finance minister Dijsselbloem was illegal. The workers, their union and a broad coalition of social movements had already successfully organized a referendum in which 98% of votes cast of nearly 220.000 people said No to the privatization, 18 May 2014.

A statement of the privatization agency HRADF (or Taiped) said that any future decision of HRADF should respect the Greek constitution and the will of the people. Suez and Mekorot have not submitted any bids yet. This is a sign of the uncertain legal nature and unwillingness to engage in a protracted local battle with trade unions, social movements and politicians, all of whom supported the referendum.

Welcoming the news as a victory for working people and their communities Jan Willem Goudriaan, EPSU General Secretary states “The Greek privatization authority and the companies are recognizing the will of the Thessaloniki people. Now the Government should ensure that EYATH is fully in the citizens’ hands and throw out old-fashioned ideas like privatization of public services as a failed concept that does not respond to people’s aspirations and is no longer of our times.” He adds: “It is also a crushing defeat for Eurozone President Dijsselbloem and the whole Troika approach of imposing harsh austerity measures. It is abundantly clear that the Troika austerity does nothing for growth, jobs and the development of the economies of the countries concerned”.

“Even the current CEO of Thessaloniki water company admits that "this back and forth privatization, has not done any good to the company struggles to carve out its development strategy”, so now is the time to declare water a human right and start implementing the demands of the people at the local level,” added Jan Willem Goudriaan.

EPSU, the European Federation of Public Service Unions, organized the international observer delegation that was present during the referendum 18 May. EPSU has been arguing alongside the Greek union and water and social movements that the privatization would not solve the problems of Greek society and that another approach focused on stimulating growth and investment is needed.