EPSU angered over Eurogroup President's satisfaction over destruction of Greece 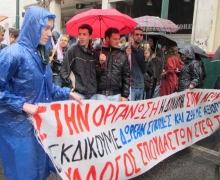 The President of the Eurogroup, Dutch Finance Minister Dijsselbloem, issued a press release in which he notes his "satisfaction" that Greece has reached a number of milestones as agreed with the Troika, 17 December 2013. These milestones include preparing the dismissal of 12.500 public service workers (euphemistically called a mobility scheme) as well as improving the financial situation of two large water companies so they can be privatised.

The Eurozone president's statement is once again proof of the fundamentalist belief of current EU leaders in their orthodox and moral economic austerity policies and comes on the eve of the EU summit which will discuss "contractual" arrangements to force governments to implement structural reforms. Dismissing public service workers implies depleting services of resources, like in the Greek tax administration. With less staff and less resources, tax inspectors can not crackdown on fraud, tax avoidance and the use of tax havens by rich Greeks and corporations.  Spending cuts impact on hospitals, schools, universities, public broadcasting and many other public services.  The policies create a bonanza of new assets and markets for corporate interests, often linked with the governing parties' leaderships. The consequences for Greek society are devastating with crime, illness, homelessness, unemployment jumping to milestone record levels which sadly are not noted by the Eurogroup President.

“With a mountain of evidence that these policies are destructive and counter-productive- for the long term future of Greek society, for human rights, for the EU's goals to address poverty, for the prospects of recovery  and potentially for the EU project, for growth and jobs, we need a change of direction”, says Jan Willem Goudriaan, EPSU's Deputy General Secretary. “But we will not get it from this Commission. A new balance of power is needed that helps charting a new course and implement an investment plan like EPSU and ETUC  are demanding”.

The reference to the situation of the water companies is a chutzpah as well as revealing. A chutzpah  as what is described here is that the Greek government makes the water companies attractive with public money, paying its outstanding debts or scrapping them, lowering the value of the companies and then sells them on to Greek and other corporate interests. Revealing as: