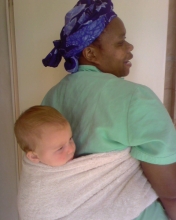 A new law will give 300,000 domestic workers in the Dominican Republic a better life. ”This will make a huge difference to the lives of both migrant and Dominican women working hard from dawn to dusk without any rights and protection,” says Sharan Burrow, general secretary of the ITUC.
A new law expected to be adopted by the parliament of the Dominican Republic within three months, will most likely give 300,000 domestic workers  coverage under labour legislation and social protection schemes.
“The time for domestic workers to have their rights respected and their dignity restored is overdue,” says Sharan Burrow, General Secretary of the ITUC.

“The ITUC is eagerly waiting for the Dominican Congress to ratify the ILO Convention and for public authorities to implement it. This will make a huge difference to the lives of both migrant and Dominican women working hard from dawn to dusk without any rights and protection,” she says.

The Dominican unions started organising domestic workers several years ago together with other workers from the informal economy lacking rights and protection. Trade union innovations include capacity-building activities, the setting-up of a school to increase technical skills and awareness on workers’ rights, a negotiated agreement with social security bodies for the registration of informally employed workers, as well as successful public awareness and advocacy work.