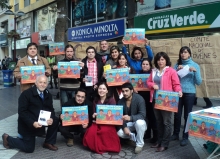 The PSI /IMPACT-sponsored project “Young workers in southern cone: from a project to a union policy”, which took place from 2011-2013, helped to strengthen PSI Regional and National Youth Committees in numbers and representation.

With project and internal funds thousands of young workers have benefited from training on precarious and decent work, PSI young workers’ policy and collective bargaining methods. Results include the creation of union youth departments, election of young workers to national union leadership bodies and participation in negotiating committees.  Additionally, well over 10,000 young workers have had their terms and conditions improved, including transferring from temporary to permanent contracts. The case of Chile illustrates some of these successes.

“I learned a lot about union work and as a result I have encouraged more young workers to participate so they can demand their legitimate labour and social rights.  We have established alliances with other youth organisations and have carried forward the banner of young public sector workers’ struggle in Chile: Decent Work = Quality Public Services,” explains the PSI Chile Youth Committee Coordinator, Ivonne Iturriaga.

In a country where the average public employee earns USD$6,000 a year and university fees cost USD$4,000, Chile’s secondary school and university students hit the news headlines with strikes, mass boycotts and protests.  The changes sought by students, who want the education system taken back from the private sector and made affordable to everyone, would fundamentally overhaul a school system that was privatized during the right-wing dictatorship of General Augusto Pinochet from 1973 to 1990.

In solidarity with their struggle, from 2010, Chile’s PSI National Youth Committee has entered into an alliance with the University Students Confederation. They have put out statements, joined demonstrations and organised activities such as the Forum on Quality Education held on International Youth Day.  Whilst not winning all they had hoped for, the Government has responded.  It has created a sub-secretariat for public education which should ensure that private education institutions have to invest their profit in new infrastructure and equipment and they have set up a government backed loan company charging 0.6% interest compared to the commercial banks 4%.

Without the continuous support of the project, PSI’s affiliates would not have been able to respond in such a consistent way.  Further, the impact of the project will be felt in years to come when those students enter the job market and understand the relevancy of trade unionism. As Veronica Prado, Southern Cone Sub-Regional Coordinator explains further:

“One of the most important achievements during the last three years has been the consolidation of youth committees as a political structure in the Southern Cone countries.  Also, the fact that Chile and Paraguay’s PSI youth committees have managed to finance themselves with contributions from PSI’s affiliates is also very significant”

For example, the Chilean PSI National Youth Committee now charges USD$20 per month from its nine affiliated unions and this has given them the independence to finance their own activities,  including youth participation in the June 23 Public Services Day activities.

Furthermore, during the project, in addition to national training, debates were organised to determine trade union youth policy and action plans.  In Chile, policy priorities included adequate funding to improve the access and coverage of public services and on young workers’ rights and working conditions. To build their evidence base, the committee conducted a survey on the employment situation experienced by young people in the public sector. Importantly, this has contributed to improved trade union coherence because all the local unions adopted the policy and then formed a common platform in which to present the policy to the CUT, their national trade union centre.

For a complete survey of IMPACT/PSI trade union development cooperation between 2008 and 2013 click here: In the People's Interest

Map: IMPACT/PSI project collaboration between 2008 and 2013