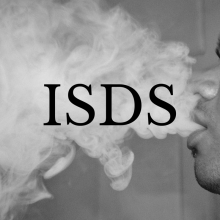 Governments are being sued through obscure Investor-State Dispute Settlement cases at a record-high rate for laws which foreign corporations say are having an ‘unfair’ impact on their profits.

The ISDS Annual Review, published by the United Nations Conference on Trade and Development, showed that a record 70 ISDS cases were lodged in 2015 bringing the current total to 696. The number of cases being brought each year has doubled in the past five years, as corporations gain drastically increasing rights to sue from a range of trade deals coming into effect.

“The exploding number of claims clearly show how ISDS enables foreign corporations to restrict governments from legislating in the public interest”, said Daniel Bertossa, Director of Policy and Governance at Public Services International.

Past ISDS cases have seen Chevron seek a payout from Equador to cover its legal bill related to environmental damages and Phillip Morris seek damages from the Australian tax-payer for public health laws aimed at reducing smoking related harm. Both Phillip Morris and Chevron are known for their aggressive tax-dodging strategies, and these further attempts to suck even more from the public purse are alarming.

Margaret Chan, Director of the WHO, recently condemned these worrying developments, saying “Something is fundamentally wrong in this world when a corporation can challenge government policies introduced to protect the public from a product that kills.”

The ISDS process, currently included in a number of international trade deals such as Trans Pacific Partnership, allows foreign corporations to sue governments in secret international courts with little oversight if they feel any legislation has an ‘undue’ effect on profits. The process has led to vehement public opposition and drawn high level criticism.

A recent report by Corporate Europe Observatory examines how the EU’s new ICS process, which was adopted as a result of widespread opposition to ISDS, has done little to address these key problems.

Other trade deals also seek to stop governments from dealing with problems in the public interest such as climate change. In a recent PSI publication, TiSA vs Climate Action, Victor Menotti from the International Forum for Globalization, showed how the TiSA agreement could impose “technological neutrality”: the idea that states should not be allowed to prioritise one energy form over another, regardless of climate concerns.