Community Health Workers in Pakistan – a struggle for union registration 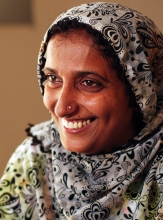 The Community Health Workers programme in Pakistan, commonly known as Lady Health Workers, LHWs programme was started in 1994 with a staff of nearly 30,000 women. Over the years, the programme has expanded to more than 125,000 employees deployed in all districts of the country. They serve as the cadre that links first-level care facilities to communities.

The programme’s objective is to provide essential primary maternal, neonatal and child healthcare services, family planning, and integrating health promotion programmes. Almost 60 percent of Pakistan’s population is covered by the programme. It was cited as a game changer in the country as it played a key role in improving health outcomes in rural areas It also revitalised the public healthcare system and reduced the gendered division of public and private spaces, which has been major obstacle in women’s access to basic services including education and employment. The programme is one of the few non-agricultural, formal sector employment opportunities for women in rural areas.

However, despite these achievements, LHWs face many challenges. They were initially not considered employees of the public health care system and were not entitled to wages and labour rights.

Faced with extremely poor working conditions without wages, long hours, no clear job description, uncertainty of tenure and lack of safety while on the field or any legal rights recognized by the state, LHWs formed an association in 2009, the All Pakistan Lady Health Workers Association (APLHWA). They started a national movement for the regularization of their jobs as public servants. They organized protest rallies, press conferences, sit-ins and nationwide media campaigns, and filed a petition in the Supreme Court of Pakistan. In 2012, when APLHWA organized a large protest in front of the Supreme Court of Pakistan with the participation of LHWs from all over the country, the Chief Justice of Pakistan ordered the regularization of all staff under the programme, namely LHWs, Lady Health Supervisors (LHSs), drivers, account supervisors and programme management unit staff.

However, because of a series of administrative delays it took more than four years for the regularisation to be adopted by each of the four provinces of Pakistan.

Since then, LHWs continue to face many issues, especially concerning payment of their wages. There are delays, arrears are not paid, fuel and vehicle maintenance allowance are denied, and salaries do not correspond with seniority and qualifications. Other issues include the lack of service structure, sexual harassment, lack of proper security during polio vaccination campaigns, denial of maternity leave and broken-down medical facilities.

Considering the denial of LHWs’ legal rights in the Province of Sindh, they organized themselves as the All Sindh Lady Health Workers Association (ASLHWA) in 2013, with the aim of collectively fighting for the rights of LHWs in Sindh. ASLHWA fights against injustice and unites around 25,000 workers and employees of the Lady Health Workers’ Programmeme.

In 2016, with the support of PSI and the Workers’ Education and Research Organisation (WERO), a labour support group, ASLHWA launched a Campaign against Stolen Wages to highlight the impacts of delayed wages and demand fair remuneration and decent working conditions for LHWs.

After three years of campaigning, the union successfully resolved some major issues on payment of wages. Regularization letters were issued to LHWs, wage costs of LHWs were included in the budget proposal of 2017 and the union made sure the requirements for bio-metric verification of employees at districts level complied with. These actions led to the payment of wages directly to the workers through the treasury. In addition, ASLHEWA successfully campaigned for the payment of arrears and payment of pending fuel and maintenance dues.

Struggle for the Registration of ASLHWEU

Despite these extraordinary achievements, ASLHWEA was not an officially registered trade union.

The process to register All Sindh Lady Health Workers and Employees Union (ASLHWEU) started in April 2017, when the union submitted a documents to the registration authority. Under article 9 of the Sindh Industrial Relations Act (SIRA) 2013, the registrar is bound to issue the registration certificate within 15 days after submission of the application. However, the application went through several administrative delays.

In July 2018, with help from PSI, the union developed a three-stage strategy to pressurize the government for registration. They decided that this would include educating the membership on the importance of union registration and holding protests in front of labour departments of different regions in Sindh. They also agreed to lobby parliamentarians and political parties, with support from like-minded senior trade unionists, lawyers and civil society organisations as well as with international labour organisations .

In the 2nd Stage, ASLHWEU leadership along with members and other trade unionists met with the labour director to demand approval of the union’s application for registration. They also warned him that more than 24,000 members would be on the streets if their demand was not met. He was further informed that the matter would be taken up with the ILO committee for freedom of association.

In the 3rd Stage ASLHWEU organised lobby meetings with the newly appointed health minister and women Members of Parliament to draw their attention to the violation of the constitutional right of LHWs by the labour department. The MPs assured that the issue would be taken up at parliament and raised in party meetings.

In the meantime, ASLHWEU also met with the legal advisor of the labour department and provided him with relevant jurisprudence regarding the formation of unions by government servants. The legal advisor confirmed that LHWs are entitled to form a union.  After almost two years of struggle, the labour department confirmed the registration of ASLHWEU in October 2018. Since ASLHWEU is the sole registered union of LHWs, it is now applying for a ‘collective bargaining agent’ certificate.

ASLHWEU organized a convention in Hyderabad on 28 December 2018 to celebrate this big win and invited its allies to thank them for their unconditional support to win the right of association for LHWs. Special thanks were given to PSI and WERO for their full support at all stages and in anticipation of their support in the future.

Mir Zulfiqar Ali is the Executive Director of Workers’ Education and Research Organisation (WERO), based in Karachi, Pakistan