From challenge to success – Organising hospitals in the Philippines

PSI has been providing solidarity to the Alliance of Filipino Workers (AFW) to build power by organising new members. PSI asked its affiliate the SEIU, the largest health sector trade union in the USA, to partner with the AFW to transform their approach to growth amongst hospital workers with positive results now emerging.

AFW represent healthcare workers in 12 private hospitals. The 12 hospitals have had AFW led collective agreements for up to 45 years and AFW has been servicing members there on a regular basis. AFW has documented examples of healthcare workers being paid starvation wages, facing violence from employers and being forced to act as unpaid personal carers and labourers for hospital management. While workers in unionised hospitals enjoy better conditions, stronger solidarity and, importantly, a voice in their workplace, AFW has not grown for several years. The Executive Committee made the decision to expand their organising capacity and resolved to unionise “greenfields” or non-unionised hospitals. But success did not come easily. 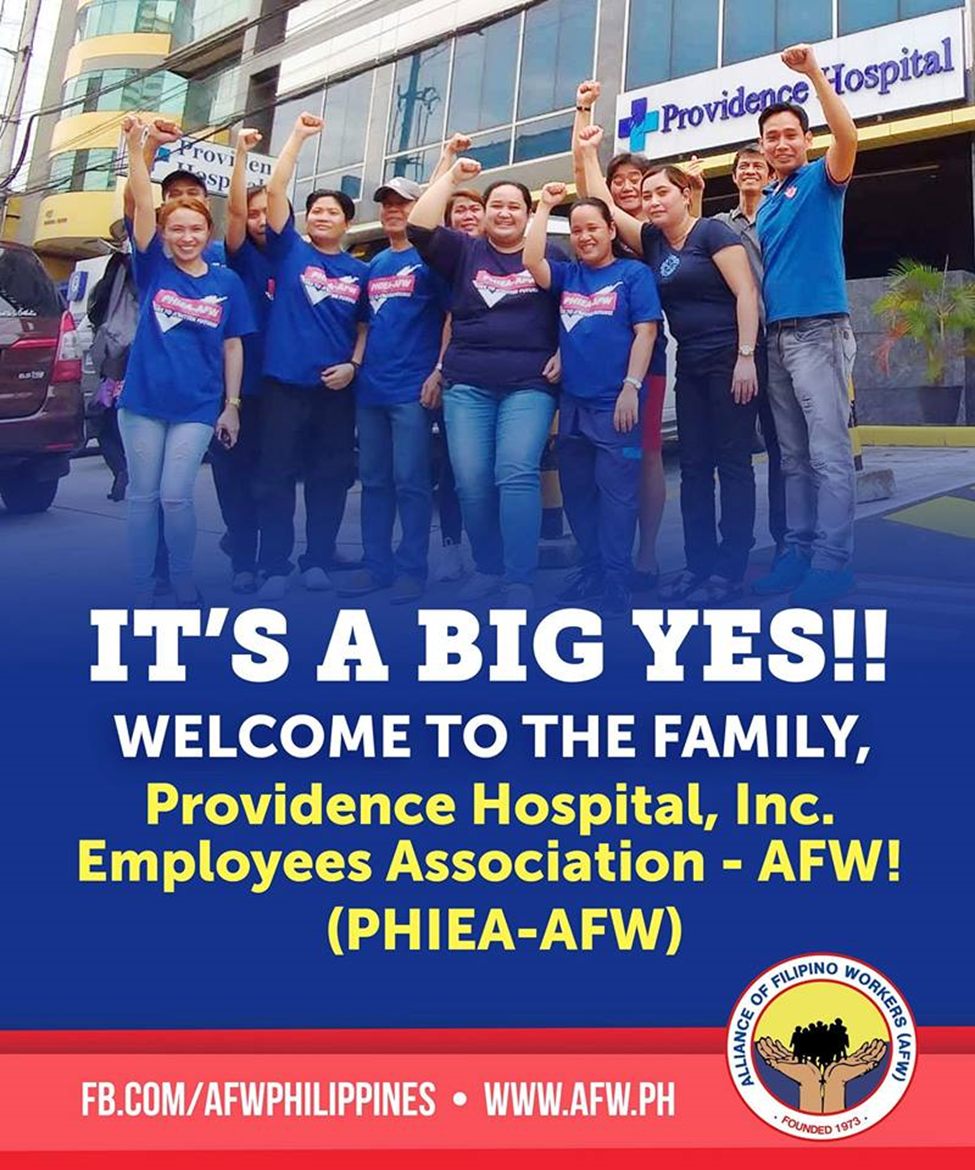 The decision to move to an organising model was made democratically, involving members and officials, passing a vote at AFW Congress. The union resolved to create a dedicated organising fund (15% of total dues) and hire dedicated staff. They identified potential hospitals to organise and selected the Asian Hospital. The plan was to test a new procedure for obtaining “recognition” through a worker petition. Although they initially obtained over 60% support, Government officials administering the process turned a blind eye when management began pressuring workers to withdraw. The union was forced to go the more traditional route of an election. Even then, hospital management launched an aggressive wave of threats and intimidation. Ultimately, their attempt to unionise was unsuccessful as they failed to get the 50% required by law. But rather than let their disappointment stop their plans, they carefully analysed what had gone wrong and came up with a list of seven lessons learnt - a list that still stands prominently in the office.

The key lessons were:

One of their key findings was that nurses had not been sufficiently organised and yet are the backbone of hospitals. They recognised the need to give nurses a stronger, independent voice in the union and any hospital they covered. So the AFW created the RN Taskforce – a network within AFW that would specifically champion the rights of nurses and act as an informal branch of the union. The initial members of the RN Taskforce, drawn from the membership and governance, undertook a ‘listening tour’, going to all AFW hospitals to better understand the concerns and demands specific to nurses.

The listening tour was a success. It gave AFW a more solid base to organise nurses, identified further union leaders and delegates and also allowed nurses to raise collective concerns with management following the meetings.

Another key lesson drawn from the initial failure was that organising needs to start with a core team of union leaders and respected workers in every department of the hospital before proceeding. Using these lessons, the AFW team targeted Providence Hospital, a hospital that included staff who had transferred from one of the unionised hospitals covered by AFW. These workers proved indispensable, being able to provide the story of hope – of what a unionised hospital could achieve – to other workers and bring together a group of likeminded colleagues to ignite the campaign and complete the mapping needed. 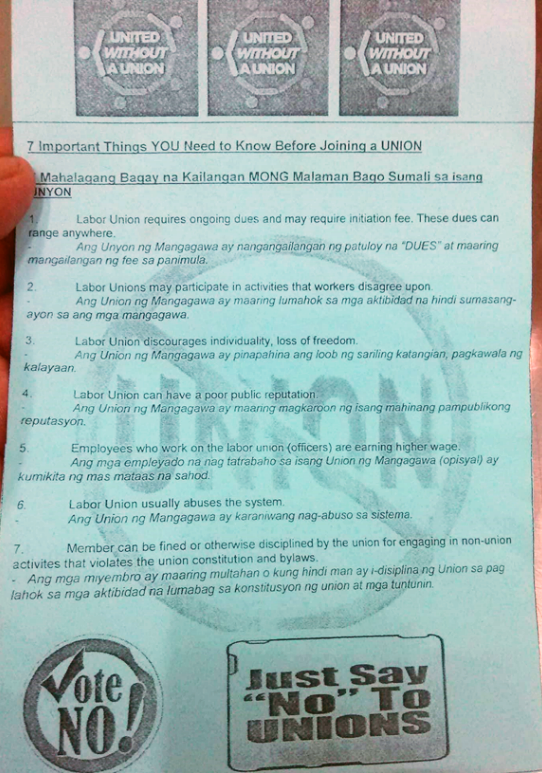 The earlier failure also gave the team a better understanding of the possible tactics of management to undermine the union and they used this to inoculate workers prior to the vote. One of the most hostile union busting tactics used was to sack or suspend union activists within the hospital. The union immediately brought these cases to the Department of Labour and Employment (DOLE) and were successful in having a number reinstated. The union continues to fight for justice for two of the dismissed union leaders.

Management circulated hostile disinformation about a unionised workforce, including bizarre claims that unions “discourage individuality” and loss of freedom and urged workers to vote no. But the organisers were ready and had inoculated the workers against the claims and scare tactics. Consequently, the management campaigns and attacks on union members often back-fired, serving to create outrage amongst workers and increased the frequency of conversations. The union campaign was now front and center of most coffee break and informal conversations. 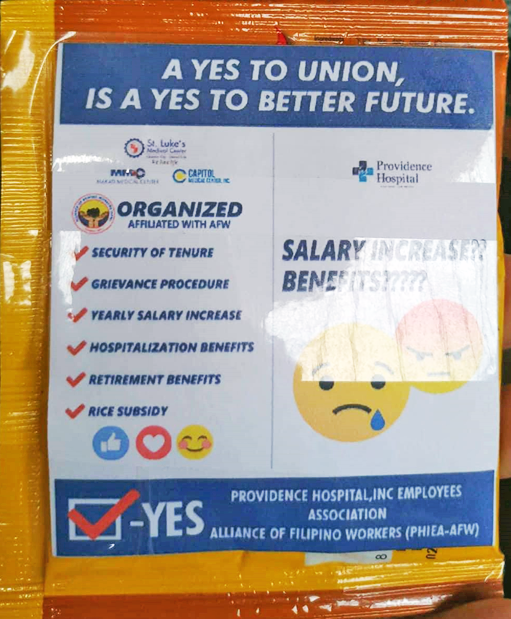 The team came up with a range of creative ways to reach nurses in the hospital. One of the most popular was to provide 3 in 1 coffee packs with information about the vote yes campaign printed on them. Almost all the nurses drank coffee during their shifts and the packs spread around quickly.

The initial team of core organisers continued to map the hospital and identify actively interested colleagues who became information points and created conversations with other colleagues in informal settings. Eventually all staff had conversations with the expanding team and were being updated on the campaign, and invited to be active in it, on a regular basis. This was important because the suspension of some of the core team would have seriously undermined the campaign if they were the only workers able to talk about the value of unionising.

Finally, when the day of the vote arrived, the team was nervous but proud that they had run a well organised campaign and they could feel the solidarity of the staff growing, particularly across the nurses. They won the vote with 63% yes votes - well in excess of the 50% required. With a strong team of organised delegates and members they are confident that they can quickly move to a member driven collective bargaining process and agreement.

The success of unionising Providence Hospital strengthened the resolve of the AFW leadership to continue with the organising approach and they have already identified two further hospitals with members ready to lead a campaign.  The organising drive has the potential to radically transform the lives of healthcare workers for the better as well as the quality of care offered in a country with large healthcare needs and PSI and SEIU are continuing to support the strategy to ensure health workers enjoy the rights and collective power they are entitled to.