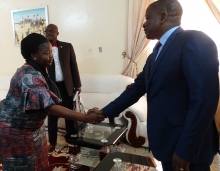 Since 2012, trade unionists in Chad have been struggling to obtain trade union rights for their members. Their hard work is starting to pay off.

When news on bad governance in Chad broke in 2012, the President of the Republic announced his displeasure and in particular his desire to "finish" with Chadian trade unions. From then on, violations of trade union rights have not ceased – in April 2016, civil society and trade union leaders were arrested and detained for four months in the Amsinéné prison. In private companies, especially Chinese-run enterprises operating in Chad, it’s common for trade union representatives to be banned.

Since June 2016, the Government of Chad has fallen behind in the remuneration of many civil servants, paving the way for a general strike that lasted several months. On September 2016, the government announced a 16-measure plan to reduce the country's financial crisis. However, the union’s proposals were not taken into account.

On 10 October 2016, the Union des Syndicate du Tchad (the most representative trade union confederation to which all ISP affiliates in the country are members), the Independent Confederation of Trade Unions of Chad (CIST), and the National Union of Teachers of Higher Education (SYNECS), formed a platform to facilitate discussions with the government. However, the creation of this platform initially led to a one-way dialogue due to the lack of cooperation by the government – following the Prime Minister's demands for a one-year social truce as a condition to participate in this platform.

A PSI mission visited Chad from 13 to 19 February 2017. The PSI delegation formed by Charlotte Kalabani (representative for PSI Sub-regional Secretary for French-speaking Africa) and Jean Marie N’di (representative for French-speaking Africa on the PSI Executive Board) met with affiliates, the President of the National Commission for Social Dialogue (CNDS), the National Council of Chadian Employers, the Minister of Labour and Social Dialogue and the Prime Minister, and made recommendations to each of the parties.

Following the PSI mission, the platform engaged in a dialogue with the government and reached an agreement that led to the signing of a Memorandum of Understanding, on 6 March 2016. Among other things, this MoU provides for the reopening of negotiations on Law 032, Decree 687, and on "any other matter under consideration". MoU also provides that the government will make efforts to pay the overdue wages and that it will set up a Technical Committee, which will conduct its business under the umbrella of the CNDS. This Technical Committee held its first meeting on 17 March 2017, and will continue meeting twice a week.

Yet it is important to recall that despite the fact that social dialogue has been reestablished, it is imperative for the government to respect the international standards to which the state is a party, as well as the national laws of Chad. For instance, the procedure for the promulgation of Law 032 did not comply with Articles 162, 167 and 168 of the Constitution of the Republic of Chad. At international level, Law 032 is contrary to ILO Conventions 87 and 98. So more efforts should be made to bring national legislation in conformity with ILO standards, consenting the free exercise of trade union rights.