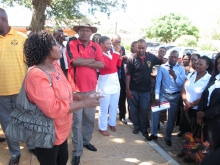 The mass dismissals carried out during the 2011 public sector strike in Botswana have been judged illegal by the High Court of Botswana. Now all the affected workers will be reinstated.

“It is plain that the applications and their members were not given a hearing before a decision that terminated their employment was taken.  This was a fundamental breach of the rules of natural justice.  This breach is so material to constitute a denial of justice. There can, therefore, be no doubt that the decision of the respondent terminating the employment of members of the applications without affording them a hearing stands to be invalidated.”

With those words the High Court of Botswana ruled that the mass dismissals carried out during the 2011 public sector strike were illegal and reinstated all the workers.

The ruling of the Court reverses an utterly arbitrary and unjust act taken by the  Director of Public Service Management, who on 16 May 2011, unilaterally dismissed thousands of trade unionists.  The director had claimed these workers were in so-called “essential services” and their actions threatened public safety.

The Court rejected this argument and noted the process was a fundamental injustice. Significantly, the decision reinstates workers to their positions as of May 2011.  This is crucial, because some dismissed workers were subsequently re-employed but with worse conditions and employment security.

PSI’s three affiliates in Botswana, the Botswana Land Board and Local Authorities Workers Union (BLLAWU), the Botswana Public Employees Union (BOPEU) and the National Amalgamated Local and Central Government and the Parastatal Workers' Union (NALCGPWU), brought the case to the High Court as part of their campaign to restore public sector trade union rights in Botswana.

Since the dismissal of workers, PSI has supported its affiliates in Botswana through campaigning and solidarity actions, including sending international delegations to Botswana and lobbying through the ILO.

Peter Waldorff, PSI General Secretary, noted: “PSI warmly welcomes the decision of the High Court. It is an honourable decision which strengthens the rights of public sector trade unionists.  Our affiliates in Botswana have worked tirelessly to secure their rights and we are justifiably proud to have been part of this struggle. We are conscious, however, that the process does not end with this decision and we remain committed to supporting our affiliates in Botswana.”

The judgement from the High Court of Botswana