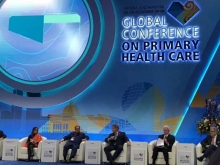 The 6-12 September 1978 conference was a watershed, defining health as a fundamental human right in the Declaration of Alma-Ata. This opened the floodgates for advocacy for primary healthcare as an anchor for guaranteeing health for all. The world, however, failed to achieve the aim of “Health for All” by the Year 2000 set by the conference.

The Astana Conference, which like the Alma-Ata Conference was convened by the World Health Organization (WHO) and UNICEF was thus seen as an opportunity to reignite commitment to the spirit of Alma-Ata, "to achieve universal health coverage and the Sustainable Development Goals".

The Astana Declaration on Primary Health Care, which was endorsed by the WHO Member States at the beginning of the conference, appears to have captured the hopes which Alma-Ata had kindled, with its sub-title “From Alma-Ata towards Universal Health Coverage and the Sustainable Development Goals”.

The Declaration, which aims at framing the role of Primary Health Care (PHC) within national efforts to achieve Universal Health Coverage (UHC) and proposing clear actions for achieving progress, is hinged on four pillars to address “today’s challenges and seize opportunities for a healthy future.”

These are: empowering people to take ownership of their health and healthcare; making bold political choices for health; putting public health and primary care at the centre of UHC, and aligning partner support to national policies, strategies and plans.

There were a series of side events organised as “café sessions” by civil society organisations. These included the Medicus Mundi International’s "Calling for a New Global Economic Order - the forgotten element of the Alma-Ata Declaration", which was supported by PSI.

This session noted that the political core of the Alma-Ata Declaration can be found in its call for a New International Economic Order (NIEO). Forty years later, this core message is missing in the commemoration of that historic moment. But, without addressing the social-economic context of healthcare delivery, achieving health for all might continue to be a tall order.

The neoliberal model of development which dominates discourse and practice today is a major obstacle to realising the right to health for the immense majority of the world’s population. Winning a new global economic order which puts people over profit is thus central to ensuring universal health care.