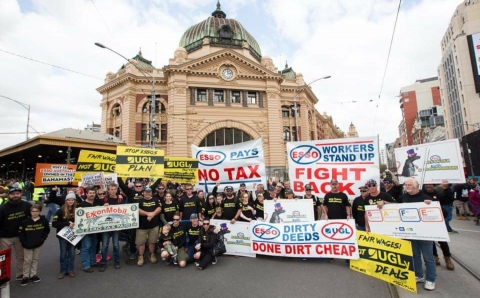 Exxon/UGL workers in Australia have been on strike for over a year now, taking a stand against an employer that has savagely attacked the rights of their workforce. PSI and BWI support these workers demanding that the Government #ChangeTheRules to make the behaviour of Exxon/UGL illegal.

These 230 workers have been on strike for over a year now, taking a stand against an employer that has savagely attacked the rights of their workforce and ignored the social obligations owed to the communities in which they operate.

“Workers never take going on strike and losing their income lightly, but this was no ordinary situation,” said BWI Regional Representative Apolinar Tolentino.

“This struggle is about challenging a broken system of industrial relations that lets big corporates act without regard for the workers that generate their wealth.”

The strike began when Exxon/UGL’s maintenance workers were sacked, then offered their jobs back with wages and entitlements cuts of 30-40 per cent, as well as new rosters that would tear fly-in fly-out workers away from their families.

It is particularly shocking that there is nothing illegal about this behaviour under the Australian Fair Work Act; by using dodgy outsourcing arrangements and sham contracting some of the biggest multinationals in the country are getting driving down wages across the sector.

Unfortunately, a growing number of employers are choosing to take advantage of these loopholes, including in high profile struggles such as Streets and Carlton United Breweries. Exploiting these loopholes, as well as cuts to penalty rates and other anti-worker policies by the Liberal Government are making harder and harder for working class Australians to get ahead.

In addition to their questionable labour practices Exxon and UGL are also in the firing line for collectively paying no tax on over $30 billion of revenue over the last three years ($24.8 billion from Exxon and $5.6 billion).

“By 2030 Australia is projected to be the largest exporter of liquid natural gas, however the Australian Government is staring down the barrel of a fiscal crisis”, said PSI Regional Representative Kate Lappin.

“Much of the resource sector pays little-to-no due to complex financial accounting and generous tax exemptions. How are public sector workers supposed to be able to bargain for better wages and conditions when that money has been shifted to offshore tax havens.”

Nationwide rallies over the last two months held by the Australian trade union movement have seen hundreds of thousands of workers hitting the streets demanding the Government #ChangeTheRules to make the behaviour of Exxon/UGL illegal.

“A year has passed since the beginning of this strike and Exxon/UGL have not only failed to drive down wages, they’ve cost their shareholders millions more than they would have ever had to in wages by policing this strike”, said Tolentino.

"It’s time to do the decent thing, meet the workers’ basic demands, and get back to work.”