Academics, social movements, trade unions and civil society organisations are meeting in Brasilia until 22 March to discuss how to resist the commodification of water in the world.

The Alternative World Water Forum (FAMA) is being held 17-22 March. Academics, social movements, trade unions and civil society organisations are meeting in the Brazilian capital to discuss how to resist the commodification of water in the world. More specifically, to present an alternative to the World Water Forum, which is taking place 18-23 March, also in Brasilia.

Organised by the World Water Council, jointly with the federal government, the environment ministry and the Brasilia DF government, FAMA calls the “official” event the Corporations’ Forum.

“The Corporations’ Forum and the World Water Council are connected to various private sector entities, especially to multinational corporations that aim to promote the commodification of water; intensify the transfer of hydrographic basins; build dams; appropriate and control underground aquifers”, explains Oscar Rodríguez, Sub-regional Secretary of Public Services International (PSI) for Mexico, the Dominican Republic and Central America and responsible for the water and sanitation sector in the Inter-American region.

“Many of these companies already control water supply and sanitation services. They want to take control of water reserves in order to obtain very high profits, causing major financial impacts and restrictions on access to water for sectors of the world's population, particularly the poorest people”, he says. 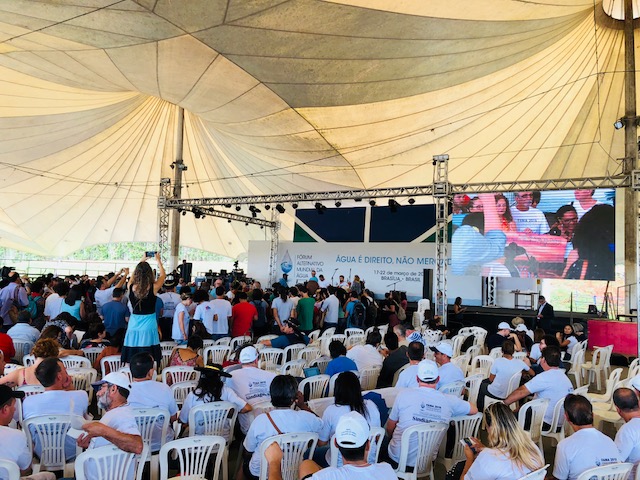 According to Liciane Andrioli, a member of the coordinating committee of the Movimento dos Atingidos por Barragens, MAB (Movement of Populations Affected by Dams), one of the organisers of FAMA, the event's main objective is “to defend water as a common good that belongs to the people”. “And fight the attempts of transnationals to promote the commodification of water by privatising rivers, water supply services and sanitation in order to accumulate private wealth. FAMA is very important because it brings together thousands of activists from various countries to formulate an action plan to intensify opposition to foreign and finance capital.”

“FAMA is taking place in Brazil in the context of the consolidation of the coup, attacks on democracy and the country's sovereignty combined with a major privatisation programme and cuts to essential rights of the people. Brazil's massive wealth of natural resources increasingly makes it a target for transnational companies. This is why we need to organise events like FAMA to build unity and the campaign to defend water, rights and sovereignty”, she says.

PSI, one of the sponsors of FAMA, and its Brazilian affiliate, the Federação Nacional dos Urbanitários, FNU (National Confederation of Urban Service Workers), will be represented at the event by David Boys, deputy general secretary, Oscar Rodríguez, water and sanitation officer for the Inter-American region, and Denise Motta Dau, Subregional Secretary for Brazil. Representatives of affiliates in Mexico, Colombia, Peru, Argentina and Uruguay are also attending the event.

Pedro Blois, FNU president, says the position of the organisations promoting FAMA “illustrates what is happening internationally: after embarking on a wave of privatisations in the 1980s supported by those who wanted to cut back the role of the state, many of the world’s biggest cities are bringing services back into the public sector”.

Denise Motta Dau says the PSI’s interest in FAMA is because it provides an opportunity to publicise examples of where countries and especially city councils have brought services back under public ownership. This is consistent with the organisation’s belief that water is a human right, not a commodity, and that is why we should call for it to remain within the public sector.

“But the media promotes capital’s drive to expropriate the water sector and so does not cover these experiences and how they represent an international trend. On the contrary, it insists that privatisation is the only way to modernise and provide good quality services, increase access and ensure productivity. This is simply not true”, he says. 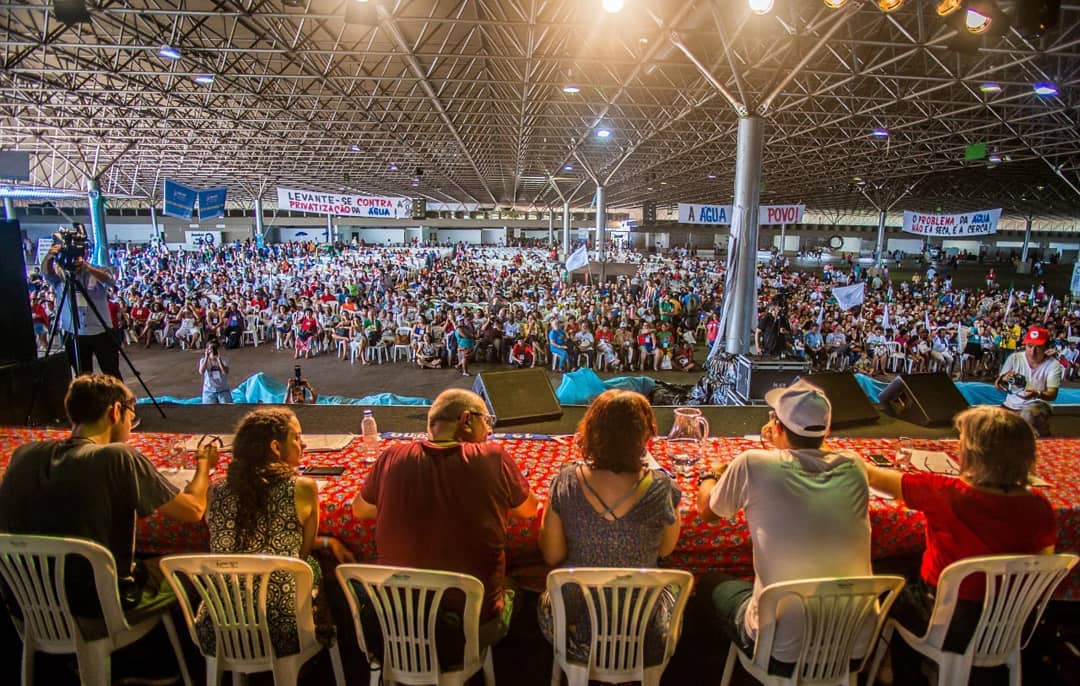 It is no coincidence that the list of partners on the World Water Forum’s website includes the magazine Época, the O Globo newspaper, the Valor Econômico newspaper, TV Globo and the Empresa Brasil de Comunicação, EBC (Brazil Communication Company).

Pedro Blois explains that the privatisation of services model has not been successful:

“Governments are cancelling the concessions they granted to private companies to run public services because the companies were unable to deliver. They said that services would improve – they didn't. They said that tariffs would come down – they didn't. They said they would create more jobs in the sector but, in fact, a lot of people lost their jobs and working conditions became more precarious. Private companies did not meet the targets for increasing access to water and sanitation, tariffs increased and the public lost the power to exercise democratic control of services or deliberate and make decisions about the sector.”

In June 2017, a group of organisations from all over the world, including PSI, produced a report entitled Reclaiming Public Services: How Cities and Citizens are Turning Back Privatisation". The report shows that there have been at least 835 cases of “remunicipalisation” of public services worldwide in recent years, involving more than 1,600 cities in 45 countries, mostly in Europe.

“These (re)municipalisations generally succeeded in bringing down costs and tariffs, improving conditions for workers and boosting service quality, while ensuring greater transparency and accountability", says the publication’s introduction.

Denise Motta Dau says PSI will present its international campaign on this issue at FAMA. A workshop on 18 March will focus on remunicipalisation experiences and deputy general secretary, David Boys will be on the panel of speakers at a plenary on capital’s strategies for taking control of water.