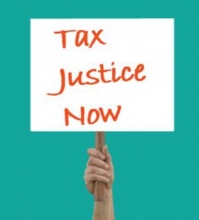 Public Services International leader Rosa Pavanelli says, “We are proud to be working at the forefront of the rapidly growing global movement to demand tax justice and accountability in public spending for the common good. Redistributing the wealth that workers help to create is not an option, it is an imperative.”

Listen to the Public Services Day interview with Rosa on Radio Labour.

OECD figures show that the value of public services equals 75% of disposable income for the poorest fifth of the population. Ensuring quality public services are delivered not only redistributes income but boosts opportunity through better health and education. When 1% of the world’s population controls 39% of the world’s wealth (and growing), tax also matters. According to OECD figures, developing countries lose three times more to tax havens than they receive in aid each year.

“Should we need more arguments, beyond the evidence in our communities,” says Pavanelli, “we can look to Brazil, where a policy of economic growth has been supported with public investments, and where the expansion of social protection to millions of people has tremendously reduced poverty and inequalities, and improved living conditions. Yet this is still only a start and Brazilians are rightly demanding their fair share of public services, supported by fair taxes. This is why PSI is strongly committed to the campaign for the adoption of the financial transactions tax and is taking an active role in the broader tax justice alliance.”

A pledge for joint tax justice campaign mobilization, The Fair Share Commitment, has been signed by more than 230 organisations to date, including an impressive number of PSI affiliates. The statement highlights the anger felt across civil society about the failure of corporations and the world’s rich to pay their fair share in taxes, and the urgent need for tax justice.

The Council of Global Unions has unanimously endorsed tax justice as a key priority of the Quality Public Services—Action Now! campaign.

Pavanelli adds, “While it is useful that the G8 countries this week made commitments to fight tax evasion and tax havens, we will be holding them to account to take quick and meaningful action. In this time of misguided austerity measures that include forced privatization and cuts to tax administrations, growing corruption is a double scandal. We call on the Greek government to stop the closure of tax offices around the country, which it began doing this week.”

Following the recent tax haven exposé by the International Consortium of Investigative Journalists, G8 discussions on fixing broken tax systems, and mounting civil unrest in places such as Brazil over misuse of tax revenues, tax has ceased to be a technical issue and is now a global political concern that elected leaders ignore at their peril.

All countries need tax revenue in order to reduce poverty and inequality by funding vital public services such as healthcare and education. There is increasing understanding that tax dodging by big corporations undermines public spending, and that the same actors and unsustainable ideologies are at work in both developed and developing countries.

The Fair Share campaign call for shared mobilization emphasizes that:

Working together across borders, partners in the new global tax justice movement are fighting  to end tax havens, tax avoidance and corruption, and to bring in progressive tax systems that are enforced, including financial transactions taxes that curb speculation.

Along with PSI and affiliates, groups which have pledged to advance joint campaign initiatives include the Global Alliance for Tax Justice, the Council of Global Unions, ActionAid, Oxfam, Jubilee South, Latindadd, Global Witness, Tax Justice Network Africa,  Attac, War on Want, and many more (see www.gatj.org).

Read the statement in Arabic